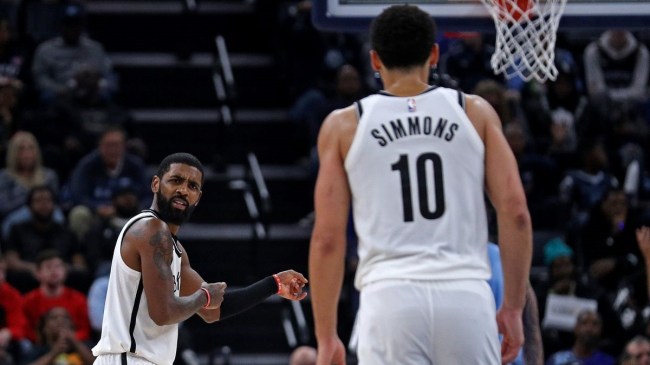 We don’t have to imagine that because the two are currently teammates on the Brooklyn Nets. Despite an unsurprisingly dysfunctional offseason, the Nets entered the 2022-23 NBA season as one of the favorites to win an NBA championship.

But four games in, Brooklyn is just 1-3, and both Irving and, in particular, Simmons have struggled. Much of Simmons’ troubles have come from his continued inability and, worse, unwillingness to shoot the basketball. Which is a pretty strange problem to have for someone playing in the NBA. But what do I know?

The issue reared its head again on Wednesday night. The Nets were in Milwaukee for a showdown with Giannis Antetokounmpo and the Milwaukee Bucks. Things were actually going well for Brooklyn and it held a 60-50 lead early in the third quarter.

The play shows Irving attacking the basket in transition and dropping a pass off for 6-foot-10 Simmons just a couple of feet from the rim. Rather than dunking the ball, Simmons kicks it out to Kevin Durant all while a clearly exasperated Irving yells “shoot it, Ben!” loudly and clearly.

Milwaukee outscored the Nets 60-39 the rest of the way and won 110-99. Simmons finished with four points, nine assists and five rebounds. He’s now averaging 5.3 points, 7.5 assists and 5.8 rebounds per game.

Irving was asked about Simmons after the game. But rather than double down, he rushed to the defense of the teammates he had just yelled at.

Maybe Irving has a short memory because in his postgame interview he called out media members for being critical of Simmons’ play.

“You guys keep coming in here asking me like what about Ben? He hasn’t played in two years. Give him give him a fu-king chance. We stay on his sh1t. You just stay on him. But we’re here to give him positive affirmations.” – Brian Lewis, NY Post

I mean, technically “shoot it” could be called a positive affirmation. But it hasn’t worked very well in the past. Maybe Kyrie Irving’s love and support is just the key that Ben Simmons has needed all along.