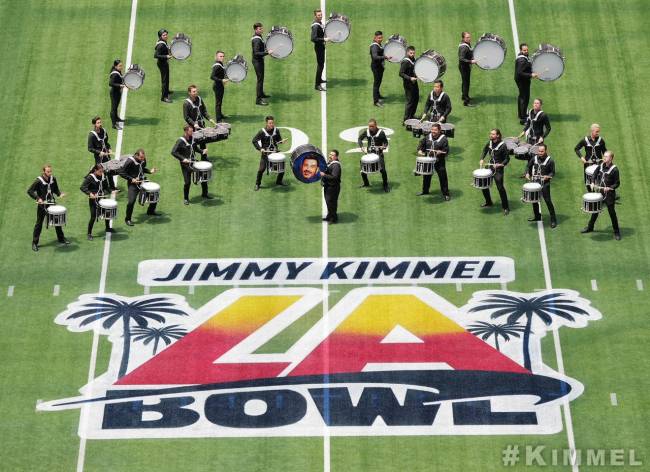 The LA Bowl’s title sponsor is rather unconventional. In an era where college football bowl games boast sponsorship from Playstation and Capital One to Famous Idaho Potato and Outback Steakhouse, the Los Angeles-based postseason game is taking a different approach.

Kimmel reportedly reached a first-of-its-kind deal with SoFi Stadium that gave the longtime television host official naming rights for multiple years. It is the first time that an individual has become the title sponsor of a bowl game.

“Never before has a bowl game been named after a human being (as far as I know, I didn’t check). On December 18, my dream of being forever enshrined alongside Orange, Rose, Cotton and Peach comes true,” Kimmel said in a press release.

None greater than the Kimmel bowl.

SoFi Stadium, home of the Rams and Chargers, is only a year old. It was scheduled to host the inaugural LA Bowl in 2020, but the COVID-19 pandemic caused its cancellation.

Fortunately, both NFL teams have announced plans for full capacity in the fall and the bowl game will follow suit. In addition, the stadium will host the upcoming Super Bowl on Feb. 13, 2022, as well as the College Football Playoff National Championship on Jan. 9, 2023.

While the Super Bowl and National Championship might seem like premier events, neither champion will be able to host a trophy with Jimmy Kimmel’s name on it.

Kimmel’s sponsorship might seem out of place (because it is), but the quality of the game is nothing insignificant. The matchup will pit the top finisher in the Mountain West Conference against the fifth-place finisher in the Pac-12. Not a bad game!

It is unclear how much Kimmel paid for the title or whether ABC helped in the financing. Either way, bowl game sponsorship is estimated to cost between $300,000 and multi-millions (for the New Year’s Six games).

Going with a strictly blind guess, the LA Bowl is toward the beginning of bowl season and is the best matchup on that day. It is also at a brand new stadium in Los Angeles. With all of that factored in, it likely falls closer to the $500,000 — $1 million range.

To put it into context, let’s look at Elk Grove Village’s return on investment in 2018. Elk Grove, a Chicago suburb, reportedly paid $300,000 to sponsor the Bahamas Bowl last year. Per those same reports, the community received nearly $12 million in “marketing value.

No matter the price tag, Kimmel’s sponsorship visibility will be a valuable investment.

Even if it doesn’t pay off, it’s hilarious. As bowl game sponsorships get more and more ridiculous (cc: the fallen Bad Boy Mowers Gasparilla Bowl), Kimmel is taking it to a new level and naming it after himself. Now that the precedent has been set, we can only hope to be treated to high-profile bidding wars amongst celebrities for sponsorships moving forward.

How funny would the “Paris Hilton Bowl” or “Jake Paul Bowl” be? You get the idea. Hilariously and brilliantly done by Kimmel.