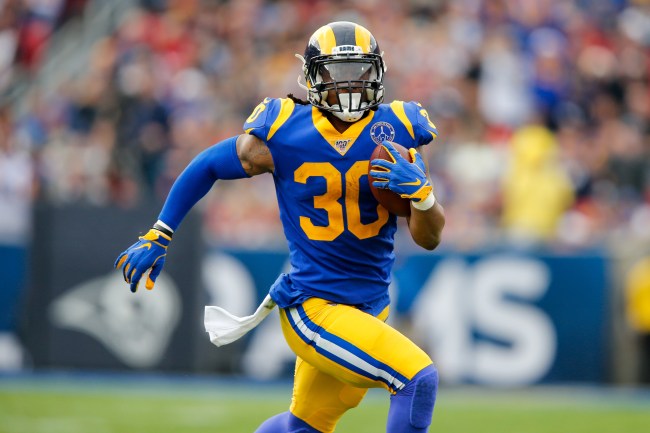 Todd Gurley is no longer a LA Ram.

Earlier in the week it was revealed that the team was attempting to trade the running back but apparently they weren’t able to find a suitor and just decided on releasing him before having to pay him an additional $10.5 million that would have been owed to him today.

The #Rams are releasing face of the franchise RB Todd Gurley, source says, before $10.5M becomes fully guaranteed on his contract.

Rams are releasing RB Todd Gurley, per source. Cutting him today spares the Rams from having to pay him an additional $10.5 million due today. Rams spent weeks exploring a trade for him. Now Gurley will be free to sign with any team.

The Rams will still have to pay Gurley $7.5 million in roster bonuses and will take pretty big cap hit for releasing him.

The Rams announce the release of Todd Gurley. He's owed a $7.55 million roster bonus (there are offsets) for 2020, and the team has an additional $12.6 million in dead cap money to be accounted for.

End of an era in LA.

The Internet was pretty shook by the move.

Rams release Todd Gurley?! Get him on a plane to Tampa. Well, I guess that's not allowed right now. But if the Bucs sign him, they'll be playing in the Super Bowl in their home stadium. #OverreactionTweet#GoBucs #TheKLewEffect

So you are telling me the #Texans could have kept DeAndre Hopkins and signed Todd Gurley instead of trading Hopkins and getting David Johnson? pic.twitter.com/ktpN1bN9K9

Tom brady finna go to Buccaneers gm & tell him to get Gurley like pic.twitter.com/zKWwuZCclX

Think how much worse Bill O'Brien looks now that he is paying David Johnson $11.1 million and traded away DeAndre Hopkins when Todd Gurley and Melvin Gordon will be much cheaper on the open market.

Todd Gurley is released by the Rams …