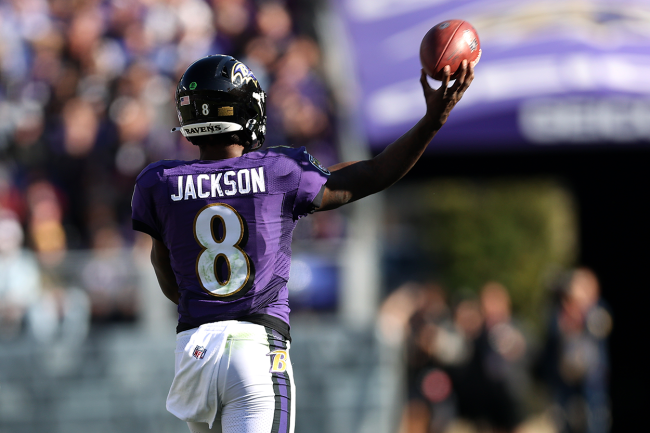 As Lamar Jackson enters his fifth year in the NFL, there is a lot of hope in Baltimore that this will be the year he takes the next step. It’s not to say that he’s been bad thus far, considering that he was named MVP in 2019, but he hasn’t made it past the Divisional Round of the playoffs and didn’t even make the playoffs last fall.

Now, a large part of the blame — if not all of the blame — can be shifted off of Jackson’s shoulders. His supporting cast is not up to par with some of the top offenses around the league and former Ravens receiver Willie Snead IV recently explained why top pass-catchers don’t want to play in Baltimore.

He says that it is definitely not Jackson’s fault.

And yet, some of the media and the “experts” (read: trolls) on social media continue to rip Lamar Jackson for his passing abilities.

To make things even more difficult for the former Heisman Trophy winner and first round NFL Draft pick, the Ravens traded Hollywood Brown, his top target, to the Cardinals. Not ideal.

In an effort to regain some of that production and surround Jackson with playmakers, Baltimore drafted Rashod Bateman during the offseason. The rookie out of Minnesota is really good. The hope is that he will quickly develop into a star WR1 sooner than later.

Based on the first look at the Jackson-Bateman connection, it looks like they’ll be getting along just fine. A video from minicamp shows the former throwing a deep ball to the latter and it is perfect. Jackson’s spiral is literally a work of art.

The team also posted a video of Jackson throwing to tight end Mark Andrews. Once again, it was a truly beautiful spiral.

To continue to doubt Jackson as a passer is lazy and incorrect. He can sling it with the best of them, but he hasn’t had the chance to really show what he can do with his arm. Maybe this is the year that the Ravens will rework their offensive scheme and let Jackson sling it deep to Bateman more often because it’s pretty clear how dangerous that duo could be.