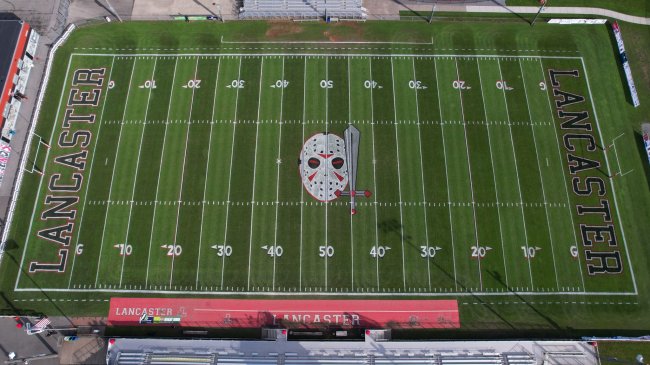 Halloween is just around the corner and the weather up north is perfect for football. The autumnal leaves are bursting with color and the cool, crisp air just hits different.

However, it’s going to get cold fast and thus, high school football teams above the Mason-Dixon Line are beginning to wrap up their seasons. That was the case for Lancaster High School in New York, who played their final regular season game on Friday night on one of the coolest fields that you’ll ever see.

Before the Legends put a 42-13 beatdown on their rivals Depew, self-proclaimed “field artisan” Brian “Bricks” Koperski put a spooky twist on the field design.

At the 50-yard-line, instead of a helmet with the letter L, he painted a Jason Voorhees mask from the ‘Friday the 13th’ series. Next to the mask was a Lance, referring to the school’s mascot.

He also put a scary spin on the numbers and it looked awesome.

The Lancers went on to win their seventh game of the season to go 7-1 on the year and secure a two-seed in the New York state Class AA playoffs. The crowd was rocking!

Lancaster will host the first round of the playoffs against Hutch Tech and it will be great to see what Koperski has in mind for Thursday’s game. Perhaps — with Halloween being next weekend and already having won on the spooky field — the Jason theme will stay?