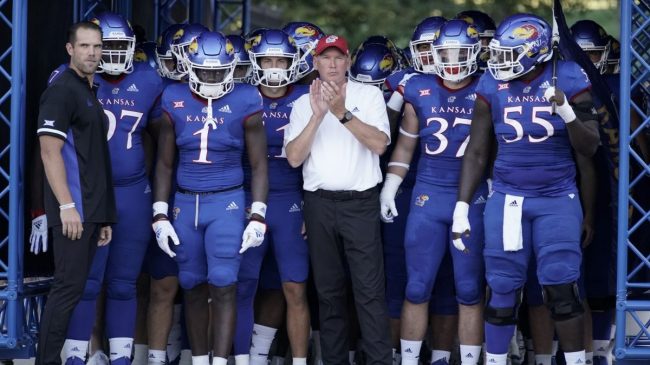 There have been few Power 5 football programs worse than the Kansas Jayhawks over the last decade.

The Jayhawks have not made a bowl game since 2008. They’ve won three games or fewer in every season since 2010, and they’ve twice gone winless over that span.

But there is now hope on the horizon.

Kansas moved to 3-0 in 2022 on Saturday with a surprising 48-30 road victory over Houston. The Cougars entered the season ranked in the AP top 25 before falling out a week ago.

Much of the credit for the turnaround belongs to second-year head coach Lance Leipold. Leipold made his name as a six-time Division III national champion with Wisconsin-Whitewater. He then took the Buffalo Bulls’ head coaching job in 2015 and led them to a pair of MAC title games before being swooped up by the Jayhawks in 2021.

After a difficult 2-10 season in his first year at the helm, things appear to be headed in the right direction. One stat, in particular, shows just how good Leipold has been.

Kansas has searched far and wide to try to find the answer to its football woes. But time and again, coaches have come and gone with little to no success.

Nothing quite exemplifies how difficult that job has been like the stat Kansas City sports anchor Harold Kuntz shared on Twitter.

In just over one year in charge, Leipold has won more road games for the Jayhawks (3) than Turner Gill, Charlie Weis, Clint Bowen, David Beaty and Les Miles combined.

College football fans were amazed by the stat.

It’s easy to see why Leipold is one of the biggest names connected to the newly vacant Nebraska Cornhuskers head coaching job.

Though Leipold may well be better off staying put.