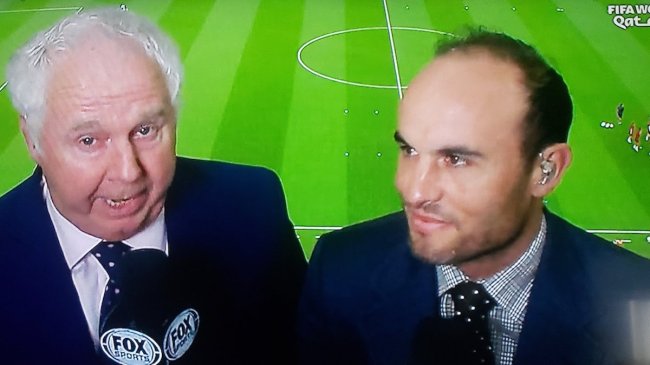 While United States soccer legend Landon Donovan has been balding for virtually his entire career, the 40-year-old USMNT icon refuses to accept his fate and go completely bald, as evidenced by his broadcasting appearances at the 2022 World Cup.

Following a TV hit that saw him and announcer Ian Darke previewing the upcoming World Cup match between Spain and Costa Rica, soccer fans took to Twitter to virtually beg Donovan to accept his dome piece’s fate and shave off the remaining 47 or so hair strains that he appears to be clinging on to.

Somebody close to Landon Donovan needs to do my man and favor and convince him to shave that mess. A complete catastrophe up there.#FIFAWorldCup

You are too rich to not afford hair plugs.

Landon Donovan is my guy, but my dude, it’s time to let it go #baldisbeautiful

when did Landon Donovan start looking like George Costanza?

Landon Donovan gotta give that hair up

Landon Donovan needs to get hair plugs or just let the whole thing go. This current look is a straight red.

Landon Donovan has to let the hair he’s hanging on to go. Zero bueños

Landon Donovan has go to let the hair go lol

While making fun of someone’s hair is never a kind thing to do, the fact is that Donovan is not only rich enough to do something about it (look at Brian Urlacher!) but he has a public-facing job that sees him on camera quite often. The camera angle that Fox Sports unleashed on him certainly didn’t help his case, either.

During his USMNT career, Donovan scored 57 goals for the Stars and Stripes — tied with Clint Dempsey for the most all-time — and is the all-time assists leader, thus making him one of the greatest players in the history of the program.

Over the course of his two-decade-long club career, Donovan played for Bayer Leverkusen, Los Angeles Galaxy, Everton, León, and even a brief loan stint with Bayern Munich. Donovan spent the majority of his time with the Galaxy, having played there from 2005 to 2014 (in addition to a final season in 2016). In MLS, Donovan won a record six MLS Cups and is the league’s all-time assists leader with 136.

As for the United States Men’s National Team, their 2022 World Cup campaign will resume on Friday when they take on England in what will likely be the most-watched U.S. soccer game of all time. They’ll then close out their group stage play with a match against Iran on Tuesday, November 29.