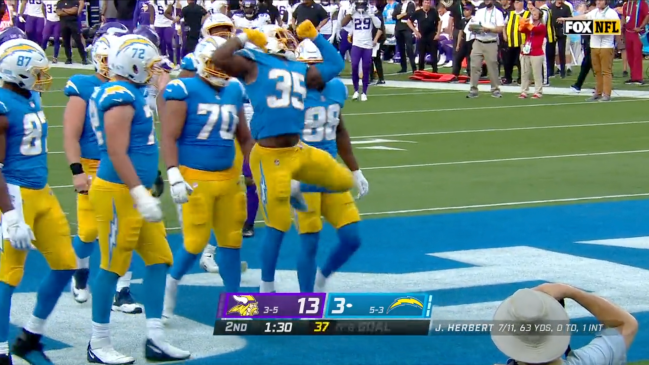 When Larry Rountree III was drafted in the sixth round of the 2021 NFL Draft, the former Missouri Tiger could not wait to find pay dirt on the professional level. The Chargers running back is deep down the depth chart behind Austin Ekeler, Justin Jackson and Joshua Kelley, so he knew it might take some time.

But when that day came, Rountree had a celebration dance planned that he knew would be worth the wait.

Larry Rountree III told me over the summer when he would score his first touchdown, his dance would be "live."

Yes, @LRountreeIII, as someone who worked in dance, that was live.

It was worth the wait and more.

During Sunday’s game against Minnesota, Rountree received his opportunity. He got his number called in the huddle during the second quarter and lined up in the backfield on 1st-and-goal from the one.

After taking the handoff from Justin Herbert, he went full superman mode and left his feet just inside the one, leaping into the air and over the scrum in the middle.

With some help from an unintentional crowd surf, Rountree was in. He scored his first NFL touchdown.

As he said it would be, his touchdown dance was “live.”

Larry Rountree III is coming for celebration of the year 😂 @LRountreeIII

There is no telling how long he had been holding on to the step dance choreography, but it didn’t matter. With his exhilarating dance, which his teammates respectfully waited for him to finish before congratulating him, Rountree is firmly atop the leaderboard for best touchdown celebration this year.

Prior to Sunday, Rountree had 29 carries for an average of 2.5 yards per carry. While he might be listed fourth on the depth chart, Los Angeles is very high on his potential.

Hopefully, for sake of NFL fans everywhere, he continues to find the end zone and continues to put on a show with his dance moves.