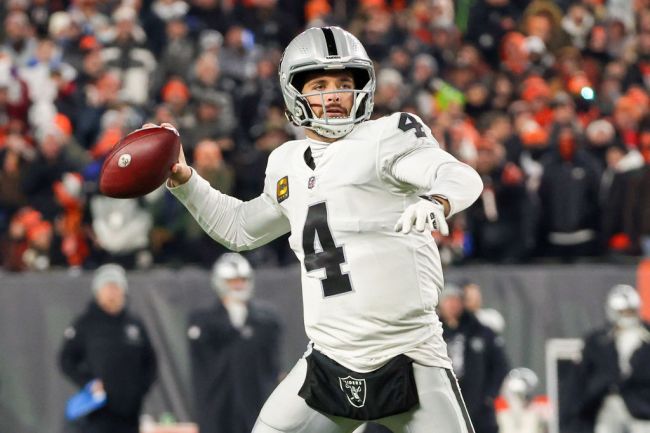 The football world was met with some surprising news this week when it was revealed that Colin Kaepernick would be working out for the Las Vegas Raiders. The workout has come and gone without a signing, but that workout has seemingly raised questions.

Yesterday, Raiders head coach Josh McDaniels shut down any concerns about that workout worrying Derek Carr about his status with the team.

“Nah, I mean, I think Derek’s pretty comfortable with where he’s at. I think he knows who he is for us and I know he knows how I feel about him, how we feel about him. I don’t think that’s really a big thing to Derek at this point.”

McDaniels also had some high praise for Carr.

“I think he knows this is his football team, and he’s working like it on the field and he’s leading the way that we want him to lead, and he’s doing all the right things. I couldn’t ask more from Derek Carr and very pleased with what he’s doing so far.”

It’s weird that this is even a question that needed to be answered. Who exactly was it that believed Colin Kaepernick was going to take Derek Carr’s job?

The Raiders just signed Carr to a huge contract extension and he is arguably coming off of the best season of his career. The Raiders aren’t going to be looking to replace him with a QB that hasn’t set foot on an NFL field since 2016.

Derek Carr probably feels pretty confident about where he stands with the Raiders heading into the 2022 season.