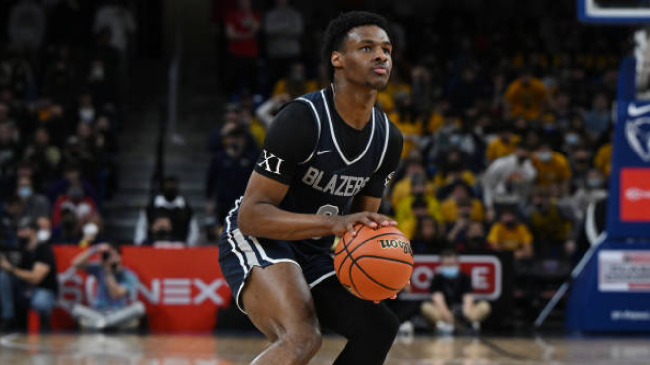 Over the past couple of months, Bronny James has seen more movement in his recruitment than just about any player in basketball’s Class of 2023.

There have been reports of a number of top college basketball programs recruiting him and he has even reportedly received offers from a couple of these programs.

Bronny James on his visit to Ohio State over the weekend. 👀https://t.co/jtL2uOMJRm pic.twitter.com/wI6NlATN9j

With LeBron James’ fondness for Ohio State, there were some who believed they could be the frontrunner to land Bronny. However, that may have changed yesterday when they made another signing for their Class of 2023.

4-star combo guard Taison Chatman revealed that he would committing to Ohio State, joining their 2023 class.

This move could mean that Ohio State is no longer in the running to land Bronny. The 2022 class for the Buckeyes includes a point guard and a shooting guard who both ranked in the top 50 in their class. Both players may struggle to get regular playing time during their freshman season as the Buckeyes also have Isaac Likekele and Sean McNeail joining the squad as transfers.

Neither guard will be likely to be a one-and-done player, which should position both of them for starting roles in their sophomore seasons. Throw in Chatman joining as a combo guard that season and you already have a crowded backcourt.

It seems unlikely Bronny would want to join a program with so much competition for minutes during his freshman season. If we are going to see the Bronny-LeBron team-up in the NBA, then Bronny will probably find himself looking for a program where he can improve his draft profile as a Freshman and head to the league to play alongside his father.

With Ohio State seeming like a program that can no longer offer him that, Bronny James may need to look elsewhere to find the right fit for his college career.