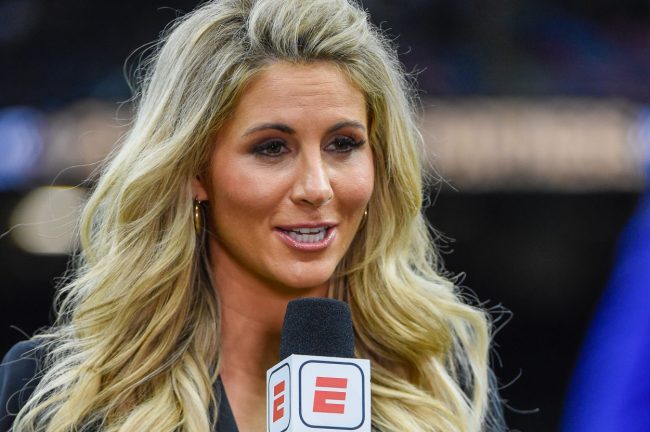 Laura Rutledge gave birth to her first child, Reese Rutledge, on October 19, 2019. Although she is only two years old, she is an absolute savant, and a way better sports bettor than you despite her age.

Her record in picking college football season games this season is remarkably impressive. After correctly picking the College Football Playoff National Championship on Sunday, Reese finished the year at 14-3.

If you had tailed Reese’s picks throughout the fall, you would have finished up 11 units. That means, hypothetically, if you put $100 on every single one of the picks that Reese made during the 2021/22, college football season, you would have made $1,100. Nooooot too shabby— especially for a two-year-old!

Every week, Reese makes her pick in the most wholesome way possible. The helmets of the two teams are placed next to each other and Reese is situated at a distance. When she gets the okay, she runs over to the helmet of the team that she thinks will win.

Here is how the year went:

Week 1 started with Georgia vs. Clemson. She chose Clemson and started 0-1.

And she evened the score with her second pick of the first week.

Reese gets 2 picks this week because why not?!! #BAMAvMIAMI @SECNetwork pic.twitter.com/vQfauJ4oIm

Ahead of Week 2, Reese picked Arkansas to beat Texas and was right.

In Week 4, in a matchup that split Laura and her husband Josh, she went with her dad’s alma mater and was correct.

Will Reese pick mom or dad this week? @AlabamaFTBL vs @GatorsFB 👀👀👀 pic.twitter.com/7PApmf8KNB

She was wrong in Week 5 when she picked Mississippi State to beat LSU.

But, once again, she bounced back on her birthday by picking Alabama to beat Ole Miss.

A special pick for Reese today. As she celebrates her 2nd bday, will she choose @AlabamaFTBL or @OleMissFB 👀👀 pic.twitter.com/j78UnDiwDg

Reese kept the streak going by taking LSU to lose to Kentucky in Week 7.

A week later, she rattled off another win by taking Georgia over Kentucky.

Reese continued her winning ways by taking Ole Miss over LSU in Week 9.

And had the Gators over the Bulldogs in Week 10.

At 8-2 in Week 11, Reese was right once again by taking Texas A&M over Auburn.

She tried to ride the Aggies’ momentum in Week 12, but Ole Miss came out victorious and she was wrong.

Reese is 9-2 on the season with her picks. Today we have @AggieFootball vs @OleMissFB 👀 pic.twitter.com/CGxrYqFmkk

Reese, however, issued an apology to the Rebels.

When Reese found out @OleMissFB won this morning and I reminded her she picked Texas A&M 😬 pic.twitter.com/RYSUWG8IvY

Reese is 9-3 and looking to get back on track with @AlabamaFTBL vs @RazorbackFB today!! pic.twitter.com/0GrThYyAQb

It’s finally time. Reese picks the SEC Championship with her 11-3 record for the regular season. A little extra flair for this one @GeorgiaFootball @AlabamaFTBL pic.twitter.com/UKjXr0mw20

To close out the year, Reese went against the Tide and picked the Bulldogs.

Reese puts her 13-3 record on the line with her final pick of the season. @AlabamaFTBL vs @GeorgiaFootball HERE WE GO!!! pic.twitter.com/cCiMyBzA3i

Reese was right and finished her remarkable run at 14-3. What a season for little Rutledge!