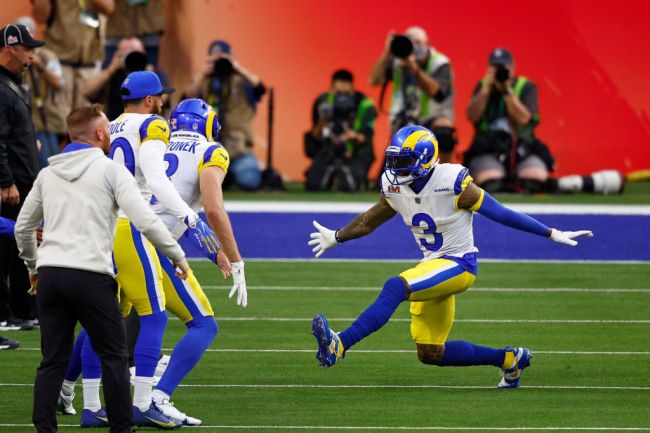 After a month of NFL free agency, football fans don’t seem to be getting any closer to find out where one of the league’s remaining stars will wind up. Odell Beckham Jr was expected to be a ht commodity after his performances with the Los Angeles Rams until an ACL injury changed things.

Odell has been linked with a few teams this offseason and has seemed to make sense in a few different locations. However, we haven’t seemed to get any closer to him actually signing anywhere.

While there still doesn’t appear to be any imminent deal for Odell, NFL insider Ian Rapoport believes there is a leader to sign him.

"I don't think it's a slam dunk that OBJ goes back to the Rams but it does feel like they're the leader in the clubhouse" ~@RapSheet#PMSLive pic.twitter.com/DuPgKbfuKI

Odell to the Rams still seems like an odd choice. The Rams already boast a very good group of pass catchers for next season. Cooper Kupp is coming off of a Triple Crown season. Allen Robinson should return to being a dangerous receiver after a disappointing season with an awful Bears offense.

Van Jefferson has developed into a solid option that they can rely on as their wide receiver 3 after he posted 802 yards in just his second season in the league. Tyler Higbee didn’t have the breakout year many were expecting last season, but should still be a dependable option for Matt Stafford.

It’s difficult to see Odell carving out the kind of starring role he’s likely looking for after once again flashing his talent with the Rams last season. He’ll also come with a bigger price tag than you’d like for you 3rd receiving option in an offense with a lot of mouths to feed.

If the Rams can actually land Odell, it would just continue to stack the roster of the defending champions and give them another weapon on their path to another title. At this point, I’m not ruling anything out for them, but it feels like Odell would be a better fit on a team with a bigger need at receiver.