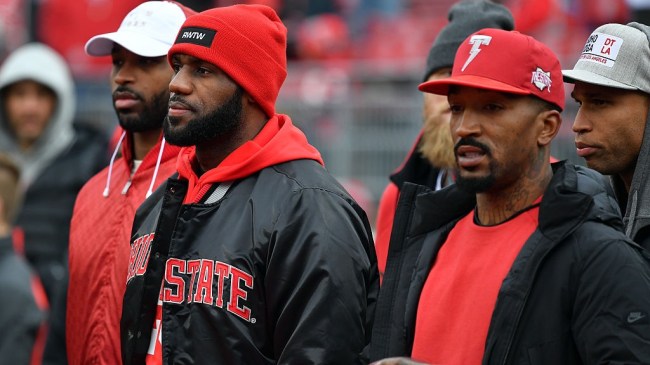 It’s the only matchup of the weekend where there is a College Football Playoff spot on the line for both teams as Ohio State and Michigan enter the game ranked #2 and #3 in the country, respectively.

Both teams hold undefeated records heading into their matchup for the first time since 2006 and the winner will claim the Big 10 East’s spot in the Big 10 Championship Game.

Ahead of this massive game in Columbus, Ohio State’s most famous fan made sure that the team had something special for the game. LeBron James gave the Buckeye football team some new cleats for this weekend’s matchup.

LeBron has long been one of Ohio State’s most notable fans. He has even mentioned the idea of playing football for the Buckeyes after his basketball career is over.

That connection to the school has led some to speculate that it could be where Bronny chooses to play next year and he even took a visit to the school earlier in the year.

Ohio State will be wearing these cleats as they look to avenge last year’s loss to the Wolverines. That Michigan win snapped a streak of 8 consecutive Ohio State wins in this matchup and earned them a spot in the College Football Playoff.

The Wolverines had plenty to say after snapping their long losing streak, which should give the Buckeyes a bit of added motivation coming into this game.

This matchup will surely deliver fireworks on Saturday.