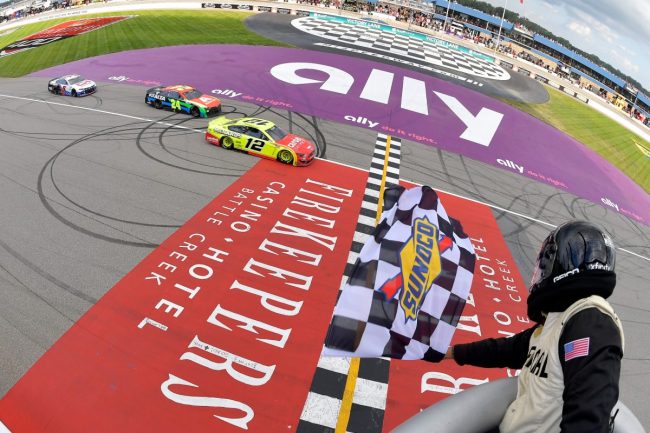 The RFK Racing team has unveiled a LeBron James themed race car to use at the upcoming FireKeeper’s Casino 400 in early August. Chris Buescher, driver of the No. 17 car, will don the new look, which highlights the NBA star’s charitable foundation as well as the I Promise school program that James founded.

Fans will be able to see the design at the Michigan International Speedway, where Bueshcer will look to land the second NASCAR Cup Series victory of his career. That win came way back in 2016 at Pocono.

This year, the driver has posted five top 10 finishes, including one top five result. He’s hoping that having LeBron’s inspiration will lift him to a win next weekend.

RFK Racing posted the new design on Twitter along with the following caption.

“Creating generational change for kids and families.  We’re proud to highlight the LeBron James Foundation on the No. 17 of Chris Beuscher in Michigan!”

The green and yellow design centers around a “King” theme while spotlighting James’s foundation and school. The NBA star responded to the post shortly after it was unveiled.

So AMAZING!!!! Wow wow wow. For the love of my kids and families @LJFamFoundation @IPROMISESchool 🙏🏾✊🏾🤎👑 https://t.co/1jvdtbGPYA

The LeBron James Family Foundation also posted on the car design with the caption, “Akron, we’re heading to the Michigan International Speedway… Anything is possible, and nothing is out of reach.”

Akron, we're heading to @MISpeedway with @RFKracing! 🏎👑 To see our Foundation represented alongside one of the most iconic racing teams in @NASCAR shows our kids from Akron that anything is possible and nothing is out of reach for them. 💚 pic.twitter.com/OIeqoSfjDA

Folks were quick to comment on the design on social media.

Who saw that coming 😳 Looks awesome!!

I'm excited we were able to make this collab happen between @RFKRacing and @LJFamFoundation and support such an important cause. We’d love to have you out to a race anytime! 😊

Can't wait to see this beauty on track next wknd 💯

Chris Buescher also gave his thoughts. It seems he’s eager to get behind the wheel.

We’ll see how the driver fares in the “King” themed car on August 6th. Regardless of the outcome, though, this partnership is a huge W for everyone involved.

Related: LeBron James plans to make money on ‘Shut Up and Dribble’ copyright