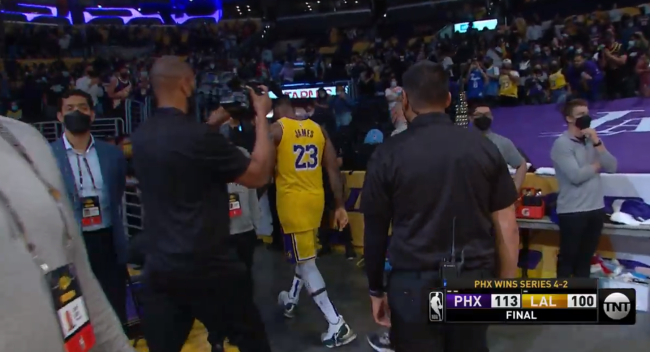 Earlier this week LeBron drew the ire of NBA fans after he left the Lakers blowout loss in game 5 against the Suns with over 5 minutes left to go in the game.

Lebron leaving with 6 min left in the fourth pic.twitter.com/MwJVLM3k7i

LeBron pissed off fans again on Thursday night during game 6 of the Lakers-Suns series. After the Lakers were eliminated from the playoffs, LeBron bolted to the locker room and didn’t shake hands with any of the Phoenix Suns players on the court.

A quick exit for Lakers’ LeBron James after Game 6 loss. No handshakes on the court w/ the Suns pic.twitter.com/hv7S60KHRk

LeBron was immediately blasted by fans for the not shaking hands after the game.

Can't wait to talk about LeBron leaving the court without shaking any hands … just as he left the bench (and stench) with 5:40 left in the blowout Game 5 loss at Phoenix. That's who he is and always has been.

Kind of a bad look; lebron leaving court w/out congrats for Suns. Most other lakers giving handshakes. Lebron looks like sore loser. #NBAPlayoffs2021

not to discredit all brady and lebron have done in their careers but it’s absolutely classless how they act like kings in victory but don’t even offer a handshake in defeat, always the first ones in the locker room

LeBron James walks off with no handshakes or respect for the other team.

I don't want to pile on but could Lebron James not have stayed on the court for a few seconds to congratulate the #Suns. When he wins he will take all the hugs and handshakes but when he loses he disappears pretty quickly!!

lebron walking off without handshakes is why I can’t cheer for him he just doesn’t have the sportsmanship when things don’t go his way ????