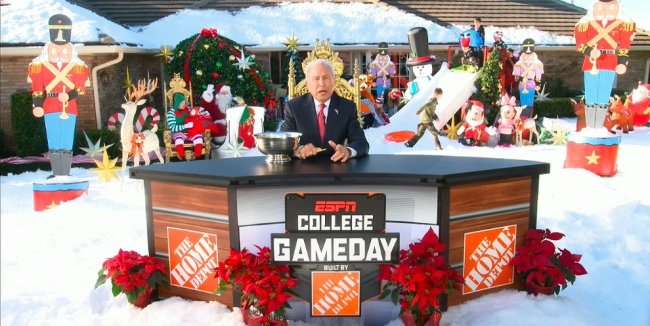 Saturday mornings from late August through early January won't be the same without Lee Corso. The 85-year-old college football analyst is increasingly showing his age, with retirement looming closer with each episode of College Gameday. Thus, it is crucial to soak up every joyful moment he brings until that day comes, starting with the most recent broadcast prior to Championship Saturday.

Sunshine Scooter has moved into a more limited role this season as a result of the COVID-19 pandemic. While Kirk Herbstreit, Desmond Howard, Rece Davis, David Pollack and the gang hit the road, Corso is filming his segments from his home just outside of Orlando.

When the show was held from Augusta, Ga. prior to The Masters a few weeks ago, he went all out with a green jacket theme.

This weekend’s backyard setup was especially awesome. As the last show before Christmas, Corso and ESPN transformed his backyard into a Winter Wonderland and had his grandchildren in town to complete the family holiday affair.

Coach Corso has his own winter wonderland this morning on @CollegeGameDay at home in Florida. His grandkids are back too. pic.twitter.com/77spOQHGy8

The staging was pretty incredible, complete with real snow and a sledding hill. Corso got in on the action and went for a spin on the slide.

My friend #DarganBirchmoreWatts transformed #LeeCorso’s backyard in #CentralFlorida into a #WinterWonderland! You can see it right now on #ESPN’s #CollegeGameday.
Bravo, my guy. BRAVO! @CollegeGameDay pic.twitter.com/lHPOhz8Fkp

If the sledding hill, real snow and decorations weren’t enough, Corso called upon the Fighting Irish leprechaun mascot and Santa Claus to help him make his famous headgear pick.

Despite his longtime Notre Dame friend being in attendance, Corso donned the tiger head and chose Clemson to win the ACC Championship. The bar has been set high. As the work-from-home season wraps up with the College Football Playoff, it will be fun to see how Corso and ESPN tries to top this week’s setup.