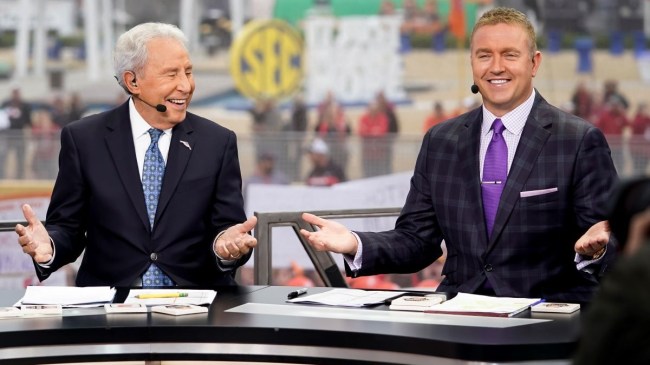 Lee Corso’s health has been a huge topic of discussion throughout the college football season. The ESPN College GameDay mainstay has missed a number of shows this season due to an ongoing health condition. At one point, some fans were even worried that Corso’s life may be in danger.

But now that appears to be in the past.

LC is back with us in Montana for @CollegeGameDay! Before the show he gives us an update on his top 4 going into this weekend 😂 pic.twitter.com/PzcO3reYbs

Corso returned to the show on Saturday morning as GameDay aired live from Bozeman, Montana for the first time as the Montana State Bobcats hosted the rival Montana Grizzlies. The two rivals are some of the top teams in FCS football. The Bobcats enter the game at 9-1 and ranked No. 3 in the nation, while the Grizz come in ranked 14th at 7-3 on the season.

Some fans were shocked to see Corso return, specifically for this edition of the show. November in Bozeman is always a tough time weather-wise and Saturday was no different. The high temperature for the day was 28 degrees with a low of -2. While the temperature hovered between 8-12 degrees throughout College GameDay. Fans were concerned about Corso’s health in such extreme conditions.

The College GameDay scene at Montana is awesome. These are the episodes we remember.

Also glad to see Corso back. I hope he doesn’t have to sit out in the cold for the entire show!

Boy I know they don’t got Corso out there in that cold weather??

Man who thought it was a good idea to put Corso out in that cold weather?

But the former Florida State player and coach at both Louisville and Indiana was unphased. Beyond that, Corso was his usual gregarious self. He even took a moment to chide co-host Pat McAfee over some eating etiquette.

Corso went full dad mode when he saw the first-year GameDay host trying to eat with his hands during a segment.

Corso getting annoyed with McAfee using his hands was cute: pic.twitter.com/814FpZtzK5

That’s who Lee is – he was making sure they all got served first and with a dash of attitude.

College GameDay would not be College GameDay without Lee Corso. And for a number of weeks, it was clear the show was missing something without him. But now it appears he’s loving every minute of being back among the fans and his cohosts.