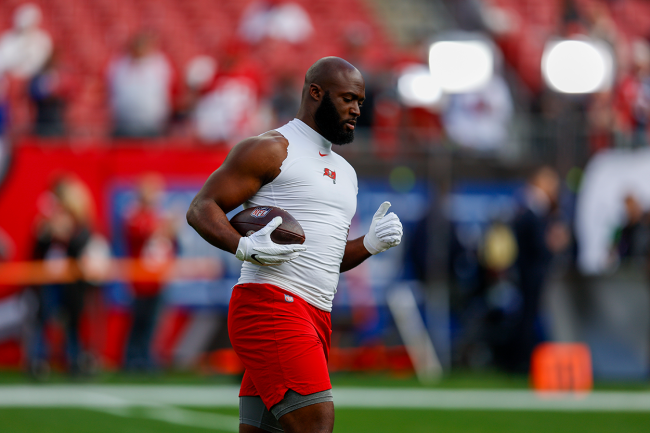 Leonard Fournette is entering his sixth year in the NFL and will be playing on the first year of a three-year, $21 million contract that he signed during the offseason. With the uncertainty of Tom Brady’s future in the league, there is a lot of pressure for the Buccaneers to get back to the Super Bowl this year.

As a result, everybody needs to be in top form. Fournette included.

However, upon arrival at minicamp last month, he was looking very thick. Fournette, who typically plays around 230 pounds, was up closer to 240 or 245 and looked like he had been eating a lot during the offseason.

The 27-year-old was completely self-aware. He knew that he was up (more than) a few pounds and committed to significant weight loss before training camp.

What Fournette did — essentially a bulk and cut — is not uncommon. Players show up heavy to minicamp and OTAs all of the time.

It’s a matter of whether thy can or cannot get back into shape before the season begins. Fournette is well on his way.

Over the course of the last few weeks, he and a few of his NFL counterparts have been working out with Jordan Bush. Bush, a strength and conditioning coach/ NFL Combine prep coach based primarily out of Austin, Texas, is getting Fournette and others into shape.

Fournette in particular has added a lot of strength during the last few weeks.

A week later, Fournette was cleaning 295.

Frenchie AKA @_fournette 295 for a double last set of Power Cleans on Freaky Friday! 💪🏾‼️⛷ pic.twitter.com/n956QWjBM2

Over the weekend, he put up 325 and looked lean and muscular. Fournette looks like a beast.

It does not look like there is any reason to worry about Fournette’s weight, strength, or explosiveness…. Unless you’re an opposing linebacker who has to try and meet him in the B-Gap.