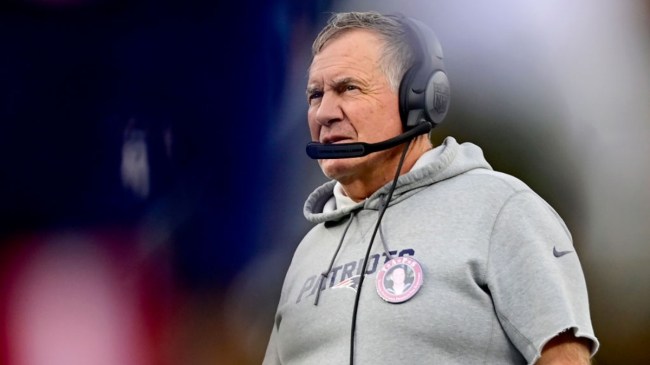 For years, debate has raged on over who deserves the credit for the New England Patriots’ dynasty. Some believe it was all Tom Brady. Others believe Bill Belichick’s coaching was the driving force.

The debate has swung in Brady’s favor since his departure from the New England Patriots as he has already won a Super Bowl while the Pats were rebuilding, but Pats fans have been given hope that Belichick can get the franchise back to the top.

Today, LeSean McCoy made it clear where he stands in this debate. While appearing on today’s episode of “Up and Adams”, McCoy gave the credit for the Patriots’ success to Brady and revealed that he believes Bill Belichick would be under .500 as a coach if he hadn’t been “blessed” with Tom Brady.

LeSean McCoy on people crediting Bill Belichick as a legend:⁰⁰“I think he is a good coach. All ‘the greatest’ and ‘we’ve never seen anything like him’. That’s bullcrap.’”⁰⁰📺: @FanDuelTV | @heykayadams | @CutOnDime25 pic.twitter.com/P3omxywm6z

He’s had Tom Brady. If you take away Tom Brady, do you know what he is? He’s under .500. I think he was very blessed to have Tom Brady. And now that he doesn’t have Tom Brady, he’s like all the other good coaches — Marvin Lewis, Rex Ryan, he’s in that class.

I think he is a good coach. All ‘the greatest’ and ‘we’ve never seen anything like him’. That’s bullcrap.

While coaching the greatest quarterback in NFL history has certainly helped Bill Belichick, the idea that he would be sub-.500 without Brady is kind of ridiculous and he’s proven that over the last season and a half.

Any team would struggle trying to replace Tom Brady. Most wouldn’t be able to recover from his absence in 2 seasons.

That’s exactly what Belichick has done. Last season, the Patriots made the playoffs with a rookie quarterback under center. This season, they are above .500 again despite playing in one of the NFL’s toughest divisions and even with Mac Jones missing games because of injury and struggling when he’s available.

The careers of Belichick and Brady certainly would have both been different if the two had not teamed up in the NFL, but it seems like a stretch to believe that both wouldn’t have still been successful without each other.