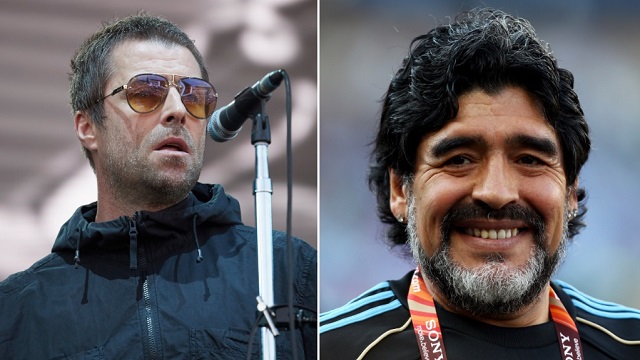 On Monday Argentine soccer legend Diego Maradona passed away at age 60 due to a heart attack. Not only was Maradona a legend on the soccer pitch, but he was well-known for his bad-boy persona and partying off of it.

After Maradona’s death, Oasis frontman Liam Gallagher paid his respects on Twitter by noting that he had met Maradona a few times and that he was “scary but beautiful.”

Back in 2017, Gallagher told a wild story to Noisey about how he once met Maradona at a bar and the soccer legend threatened to shoot him if he messed with any of his women.

We was in Argentina, and we’d done a gig.

“Next minute we’re sat in the bar having a f**king drink, and about 30 people come legging it in, like the Ant Hill Mob.

“We were going ‘Who the f**king hell’s that?’ Sting was at the bar crying cos he’d had his f**king dressing room robbed, and anyway we found out it was Maradona.

He’s gone up, come back down and gone ‘Only the Gallagher brothers can go up.’ So we were like, ‘laters’.

“We steamed up there and there’s loads of f**king, activity going on, and Maradona’s in the middle of the room doing football tricks with a bottle top.

“And his eyes were f**king like that [huge], and ours weren’t far off, and I just went like, ‘It’s a bit moody in here, let’s get a quick picture with him and f**k off.

Here’s the photo of Liam and Maradona hanging out together that night.

This is absolutely incredible. Now look at this pic from that night hahahahahahahaha https://t.co/odnGFely1U pic.twitter.com/0eKQukoLzm