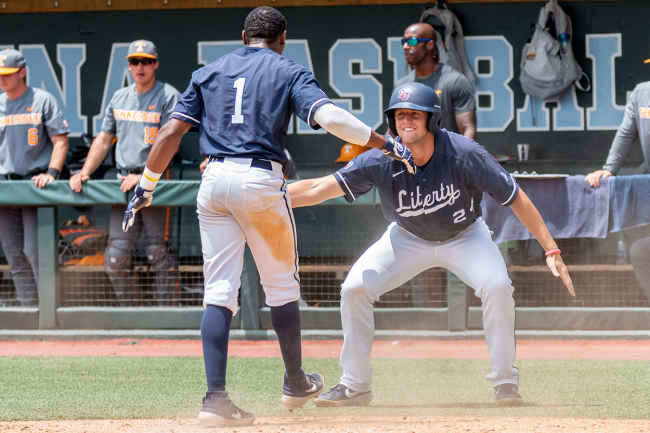 Liberty University baseball is one of the top “mid-majors” in the country and have their sights set on a semi-Cinderella run to Omaha this season. At 20-10, the Flames are just outside the Top-25 but have shown the ability to compete with anyone in the country.

Despite some bad losses to North Florida and Stetson, Liberty has a series win over top-10 Florida, No. 15 North Carolina, Duke and other strong mid-majors. The Flames will have the chance to host No. 12 Virginia Tech on Tuesday and will play a few more local “Power Five” teams before the season closes up in late May.

When they are at home, Liberty tries its best to give itself an advantage at the dish. While opposing pitchers are warming up, the Flames ruthlessly troll their opponents by playing a terrible, ear-splitting rendition of Celine Dion’s ‘My Heart Must Go On.’

It is not Dion’s version. Instead, the song is performed by a screechy, piercing, off-tune recorder that is struggling to hit the right notes.

The warm up song for opposing pitchers at @LibertyBaseball is great. Not sure if you can hear it on the video or not. pic.twitter.com/LKwVM8ZurY

The song is extremely, extremely obnoxious and it cannot be conducive for an opposing pitcher to try and get his mind right before toeing the rubber against a live batter. Based on their 15-5 record at home, the Flames might actually be onto something!