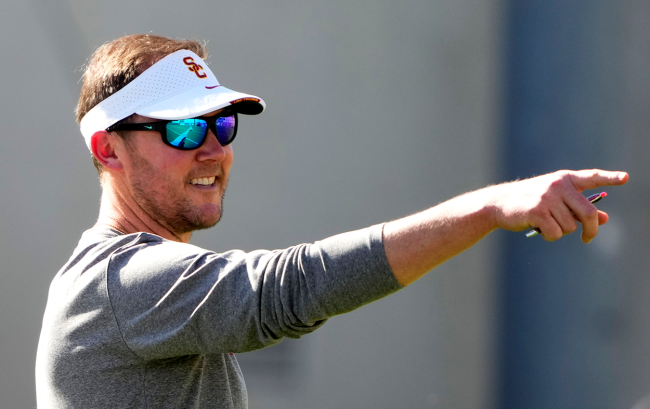 USC football is on the come-up and there is no two ways about it. Whether the Trojans will return to success immediately is yet to be determined, but there is simply no denying that they are on an upward rise toward the days of yore.

A big part of that trajectory comes with a change in culture. Lincoln Riley was hired away from Oklahoma after years of success with the Sooners and has brought a reinvigorated energy to Los Angeles.

Of course, Riley also brought Caleb Williams with him. That certainly helps.

Regardless of the talent on the roster and whether USC can reach or win the Pac-12 Championship this fall, the feeling around the program is positive. That was not the case just six months ago.

The Trojans are having fun and a recent video from spring practice gives a great look at the current culture within the USC football program.

In the video, posted by the team’s official account, the coaching staff — Riley included — are doing up-downs, while the players watch on. Riley made a wager with USC’s place kickers and lost.

The kickers made both field goals. As Riley and his staff hit the turf, Williams was right in the thick of it having a blast making his head coach keep his promise.

Recruits, join the LFR’s ship. What a vibe! #FightOn ✌️ See you at the Coli! April 23th 🤝 pic.twitter.com/CGQ1T5q8CO

Can you imagine Clay Helton doing up-downs with his team during spring practice? It’s a new era at USC.