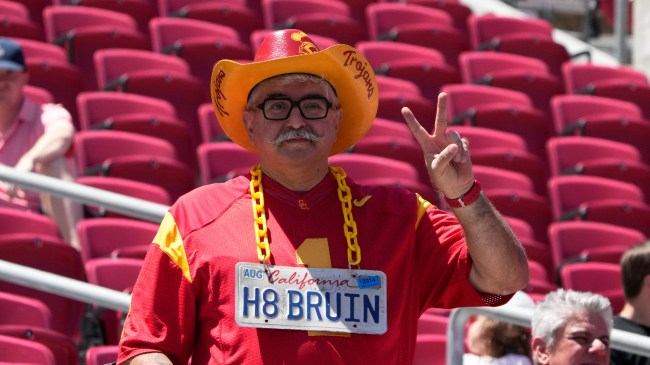 The USC Trojans are oozing with enthusiasm for the upcoming college football season.

In comes new head coach Lincoln Riley, who brings with him former Oklahoma QB Caleb Williams and a plethora of talent in the transfer portal. After struggling through the last few seasons, the Trojans are hoping to get back to the college football relevance they saw in the mid 2000s.

Fans got the chance to see their new squad in action over the weekend as USC held its annual Spring Game to wrap up offseason practice. Unfortunately, it didn’t seem that too many people were in attendance.

That, of course, got some Oklahoma Sooners fans talking as they’re still bitter about the way that Riley left the program to head out to the West Coast.

The Sooners appeared to sell out their Spring Game in the first season under head coach Brent Venables. Despite having lost some of their top players in the portal to USC, they made the trek to the stadium to support their team.

And despite USC’s excitement for 2022, they did not.

There was an absolutely packed house in Norman to see the Sooners gear up for the 2022 season, while the attendance in Los Angeles was certainly lacking.

It’s far from the outcome you’d expect from a traditional power looking to return to national prominence.

The response from Sooner fans was one in the same. Head coach Lincoln Riley might’ve booked it for something shiny in the City of Angels, but football will always be king in Oklahoma.

Damn it feel good to be a Sooner! #OUfootball https://t.co/1Rl2ErL4BZ

Lmao USC has like a 12 person fan base https://t.co/QCQ9ChiJMn

It will be interesting to see how the season plays out for both programs as they look to find a spot in the College Football Playoff. One thing is for sure, though, this newly born rivalry will have fans on both sides comparing their success in 2022.