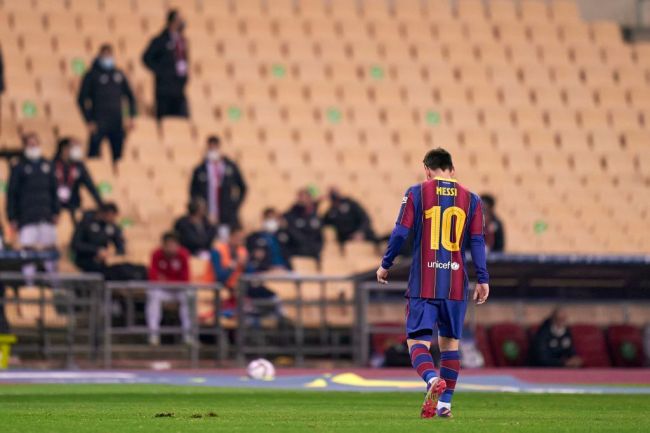 Lionel Messi doesn’t like to lose. The Barcelona forward is one of the greatest to ever play the game and his success is immense. However, his club was upset by Athletic Bilbao in the Spanish Super Cup on Sunday with a late goal. Barcelona was on pace to reach a record-extending 13th victory in the competition after going ahead 2-1 on two Antoine Griezmann goals but couldn’t hang onto the lead as the game came to a close. Athletic, who knocked out Real Madrid in the semifinals, scored in the 90th minute to level the match and send it to an extra period before adding a third goal in the 93rd that would prove to be the winner.

The loss was frustrating to Messi, who is in his 20th year with the club, and he let his emotions get the best of him. He played a pass in the final minute of the extra period and took a swing at Athletic forward Asier Villalibre as he crossed Messi’s path. The incident resulted in a red card for Messi that saw him get sent off for the first time in his career with Barcelona. The referee missed the incident at first, but a VAR review showed Messi’s clear strike on his opponent.

Messi appeared in 753 matches for Barcelona without an ejection but was given one for violent conduct on Sunday. He had received two other red cards in his career, but both came in international play with Argentina. Frustration has been a constant for the Barcelona captain of late, and he is out of his contract this year. He chose to stay with the team after declaring his intention to leave last summer but is almost certain to leave Spain when his contract allows.