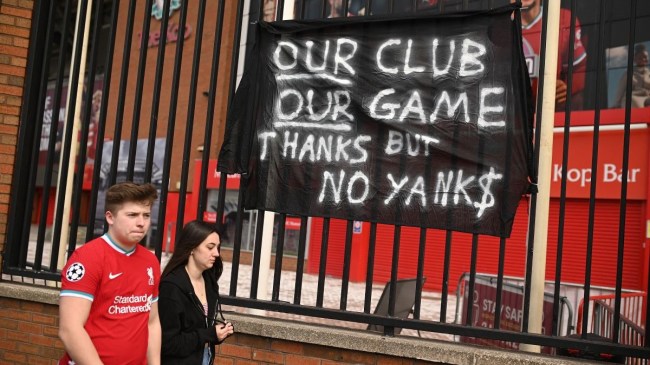 As the saying goes: be careful what you wish for, because you just might get it. But that hasn’t stopped Liverpool Football Club fans from celebrating over news that Fenway Sports Group has reported put the legendary English club up for sale.

David Ornstein of The Athletic reported on Monday morning that the ownership group, which also owns the Boston Red Sox, has retained the services Goldman Sachs and Morgan Stanley to help with the process.

“A statement from FSG, who also own the Boston Red Sox, to The Athletic read: “There have been a number of recent changes of ownership and rumours of changes in ownership at EPL clubs and inevitably we are asked regularly about Fenway Sports Group’s ownership in Liverpool.

“FSG has frequently received expressions of interest from third parties seeking to become shareholders in Liverpool. FSG has said before that under the right terms and conditions we would consider new shareholders if it was in the best interests of Liverpool as a club.” – via The Athletic

Fenway Sports Group purchased the club for 300 million pounds in 2010. Forbes now values the club at over $4 billion. Much of that is due to the Reds’ massive recent success. Liverpool has 19 English top-division championships. That’s second-most all-time behind Manchester United with 20.

But it wasn’t until the 2019-20 season that it first won what’s currently know as the Premier League, which began in 1992. Liverpool also won the UEFA Champions League in 2020. It was the club’s first such win since 2005.

But English fans didn’t take to the American ownership group, even despite the recent success. Supports rallied against the owners just last season, demanding them to sell the team.

Now those same fans are celebrating the news of a potential sale.

Told ya that Klopp is just covering a lot in his interviews. A lot has been going on for years now. Klopp saying he doesn't need players are all cover-ups. The owners weren't willing to spend much again on squad rebuild. https://t.co/2ZfnWD2zUM

I take credit for this, I've worn John Henry down🤣 https://t.co/sTeWu7IEi9

The announcement comes on the heels of fellow English powerhouse, Chelsea, being sold for over $5 billion to an ownership group led by LA Dodgers part-owner Todd Boehly.