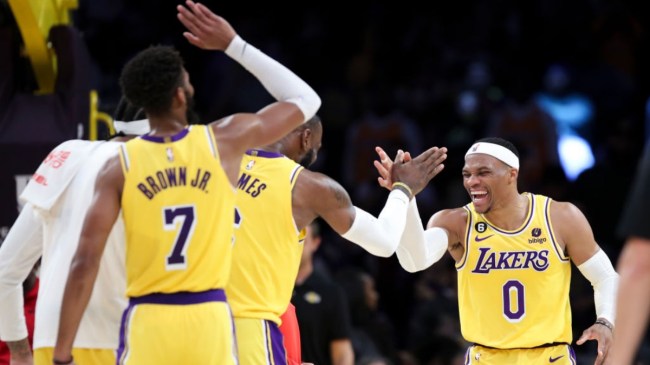 After a brutal start to the NBA season, the Los Angeles Lakers have started to turn things around. LeBron James and company have gone 6-2 in their last 8 games to work their way back to 8-12 and within a couple games of a playoff spot.

The turnaround has come with the team’s only really change being the move to have Russell Westbrook come off the bench.

Now it seems like they are considering making a much bigger move in a move to truly get themselves back into contention.

Today, Zach Lowe revealed on “The Lowe Post” that the Lakers are having internal discussions about offering Russell Westbrook and a pair of 1st round picks to the Chicago Bulls in exchange for DeMar Derozan and Nikola Vucevic.

According to @ZachLowe_NBA, the Los Angeles Lakers have had internal discussions about a potential trade for Chicago Bulls forward DeMar DeRozan and center Nikola Vucevic.

This would be a pretty big change for the Lakers from their approach during the offseason as they were very hesitant to deal those picks throughout the summer, but it looks like they feel this deal is worth those picks enough to at least be talking it over.

Adding Derozan and Vucevic would certainly give them a loaded starting lineup with those two playing alongside LeBron James and Anthony Davis.

However, the Lakers could just run into the same issue they’ve been having if they make this deal. They could end up with a loaded lineup that just doesn’t gel.

Neither Derozan nor Vucevic is the 3-point threat the team needs to stretch the floor and open up space for their players find space inside.

The Lakers becoming willing to deal those 1st round picks would certainly a step in the right direction, but this just might not be the right deal for them to finally give up those picks.