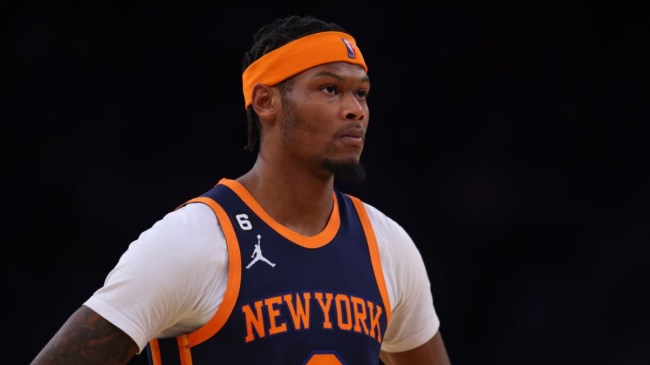 There were plenty of negatives that came out of the 2021-22 New York Knicks season.

The team regressed in a big way just one year after making the playoffs and dealt with some bad contracts along the way.

Luckily they were able to offload those contracts this offseason and have gotten themselves back into the playoff hunt. However, there is one mistake they made last season that they are still dealing with today.

Last season, they made a deal with the Atlanta Hawks to land Cam Reddish that cost them Kevin Knox and a conditional 1st round pick. Unfortunately, they haven’t been able to find a place for him in their lineup since making that trade.

Yesterday it was reported that the Knicks and Reddish’s reps are trying to find a trade for him.

He started 8 games this season, showed flashes of the blue-chip potential.https://t.co/O9vlMhhcFt

Today, SNY’s Ian Begley reported that the Los Angeles Lakers have touched base with the Knicks about a potential deal.

.@IanBegley reports that the Knicks and Lakers recently touched base on a 3-team trade:

"It seems like this rotation is here to stay, with McBride in, Derrick Rose out, Cam Reddish out, Evan Fournier out. You can expect to hear those players' names come up in trade rumors" pic.twitter.com/Em5eUgCoAX

The Lakers were among the teams interested in Reddish last season, but the hawks took the Knicks’ offer instead of the 2 second round picks the Lakers offered.

Anything would be an improvement for Reddish at this point after he was entirely left out of the rotation for the last 2 games.

Reddish was knocking down almost 38% of his looks from 3 last season before the trade, so if he can get his shot back to where it was with the Hawks, he could provide the Lakers the boost on the perimeter that they’ve needed this season.

With him not really being a factor for the New York Knicks right now, the Lakers probably wouldn’t have to give up much to take a chance on him.

As long as the Knicks’ demands aren’t ridiculous, Reddish could be worth the risk for the Los Angeles Lakers.