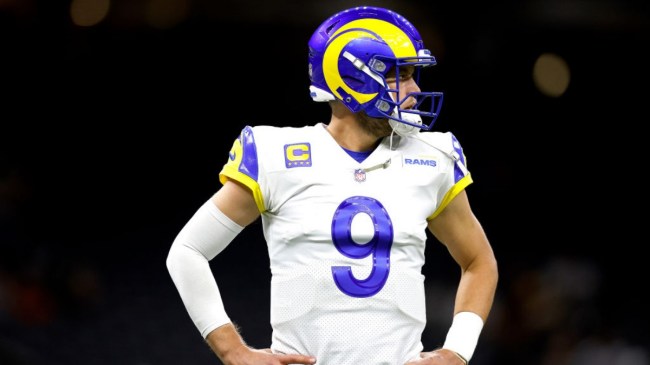 A disappointing season for the Los Angeles Rams just keeps getting worse.

In the midst of all of these injuries, the team’s quarterback has also been dealing with injury issues. Matthew Stafford missed Week 10 with a concussion, but was able to return a week later. After the team’s Week 11 game, he once again went into the concussion protocol, but he was also dealing with another injury.

Rams head coach Sean McVay revealed after that game that Stafford was also dealing with a neck injury and had experienced numbness in his legs after taking a hit against the Saints.

If the Rams’ season wasn’t already over, this should just about be the end of it. The offense has been bad without Stafford. Last week they only managed 196 total yards against the Chiefs.

This is also probably bad news for anybody hoping to get Cooper Kupp back for their fantasy football championships. The early end of his recovery timeframe would put his return around Week 17. With the season spiraling it seems unlikely they’re going to rush him back and risk re-injury.

With the Rams not having much left to play for this season, hopefully all of their stars dealing with injuries will be shut down for the year so they can heal up ahead of next season.