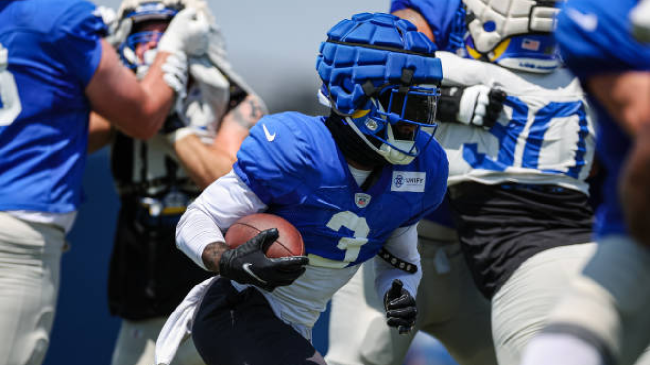 After the first game of the NFL season, most of the focus was on the way the Buffalo Bills dominated the defending Super Bowl champions. However, for many fans who play fantasy football, there was one other huge takeaway from the game. Drafting Cam Akers might not work out for them.

Today, Los Angeles Rams head coach Sean McVay was asked about that player and didn’t seem to indicate a change would be coming soon.

Sean McVay said RB Cam Akers has to maximize his opportunities when he gets into the game.

McVay went on to explain that the decision on Akers’ usage comes down to Akers not living up to expectations or the potential that McVay sees in him.

Sean McVay on RB Cam Akers: "There were some instances where there were some positive things and some things that he can do better, but we want to see just an increased level of urgency and accountability snap in and snap out from him.”

McVay: “I know what Cam is capable of. We've all seen how talented and what a special player this guy's capable of being. And I want to see him reach his highest potential."

McVay on Akers: "It's more of a reflection of the confidence that I know what he can be and I'm confident that he'll be that guy that we've all seen at the right moments as this season continues to progress. And that's our job to help get it out of him."

One play that stands out as a particular reason he may be in the doghouse right now came on this block that he chose not to make, leading to Matt Stafford taking a big hit.

He was already behind Henderson in the pecking order at that time, but it surely didn’t help his efforts to change that.

Akers was already facing an uphill battle this season. He is trying to come back from tearing his achilles last season, something that running backs never seem to fully recover from. Now, he has to try to supplant Darrell Henderson while making that return.

There is still plenty of time for Akers to work his way up the Rams depth chart this season, but it could be a long year for anybody who drafted him if he doesn’t change things soon.