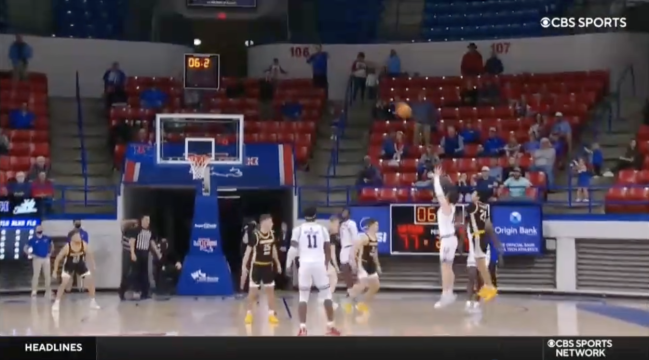 Thursday night’s game between Louisiana Tech and Southern Miss was not particularly close. The Bulldogs went on to win by 23 and moved to an impressive 14-3 on the year.

As a result of the big margin of victory, the second half was not particularly exciting. Except for the last 15 seconds, which was the most exhilarating part of the game.

The 6-foot-3, 195-pound guard has played in six games this season, totaling 17 minutes on the year. Prior to Thursday he was 2-6 shooting and 0-3 from beyond the arch.

That changed against Southern Miss.

After entering the game in the final four minutes, Ponder did not get a shot off through the first three minutes and 53 seconds. And with less than 15 seconds remaining, the Bulldogs would typically dribble the clock out.

Ponder got the ball just beyond the three-point-line and pulled up from distance. Swish.

The walk-on from Shreveport knocked down his first-career three-pointer and the bench went absolutely wild. They and the crowd reacted as if Ponder had hit the game-winner to win the conference.

When the clock hit zero, they mobbed him at mid-court. It was awesome.

“WALKS ON AND WALKS OFF THE BENCH WITH A WALK-OFF THREE!”

Ponder, who was the Student of the Year and Valedictorian at Calvary Baptist Academy, is a fan favorite. His mom played softball in Ruston and he is carrying on the family legacy.

He is forever a folk legend after Thursday.