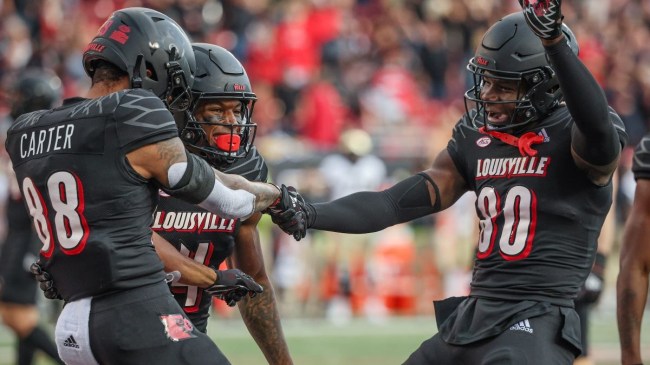 Louisville Cardinals coach Scott Satterfield began the 2022 college football season on the hot seat. The Cards hired Satterfield, then a hot commodity, from Appalachian State in 2019. After an 8-5 record in year one, Satterfield went 4-7 and 6-7 in the following years and appeared dead in the water.

But 2022 has been a turnaround season. The Cardinals entered Saturday’s Governor’s Cup showdown with Kentucky at 7-4 and ranked No. 25 in the latest College Football Playoff rankings. Additionally, Satterfield has helped assemble one of the nation’s top recruiting classes for 2023, headlined by star running back Rueben Owens.

However, Saturday’s game against the Wildcats didn’t go according to plan. Kentucky jumped out to an early 7-0 lead and never looked back, holding on for a 26-13 victory. It’s the fourth straight victory in the rivalry game for the Cats.

Louisville star quarterback Malik Cunningham entered the game with lingering injury issues and played sparingly. In his absence, backup Brock Domann struggled mightily. Domann went 14-of-21 for 129 yards, one touchdown and one interception.

None of those 14 completions went to freshman wide receiver Chris Bell. But Bell made sure he had his say after the game ended.

Louisville player throws water bottle at Kentucky fans at the end of the game. pic.twitter.com/nXcaYxu8qu

After the game ended, the Mississippi native was seen on camera launching a water bottle in the direction of a number of Kentucky fans. To make matters worse, it appears that Bell checks to make sure that none of his coaches are watching before throwing the bottle.

Lol look at this dummy, looking around to see if anyone is watching him 😂 😅 https://t.co/yIPmcKYoAT

Louisville is just the worst. https://t.co/tk5Ytapp36

According to Louisville’s official team stats, Bell has appeared in eight games this season. He’s made six catches for 94 yards on the year, with a long of 29. Something tells us that he likely won’t be playing in any more games this year despite the Cards qualifying for a bowl game.