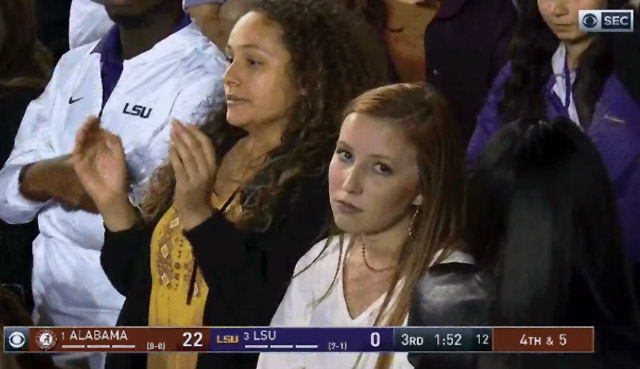 Every now and then someone catches the public’s eye during a sporting event and becomes a meme that sweeps the nation. There was the crying Northwestern kid, Villanova’s Piccolo Girl, shocked Undertaker guy, the “good job, good effort” kid, and many, many more.

This week, during Alabama’s dismantling of LSU, the world was introduced to another unintentional sports meme when the camera zoomed in on an LSU fan giving the camera the kind of death stare that could melt an iceberg.

Here. Have this one on me. pic.twitter.com/9PpaDe5PLS

With Alabama up 22-0, this LSU fan was most definitely not feeling it. And the internet loved her. In fact, it loved her so much it wanted to know more.

Sensing an important story developing, The Athletic did some digging and figured out who the LSU death stare girl was. Turns out she’s an 18-year-old LSU student named Kaileigh Thomas and she had no idea at the time of the stare that she was about to get her 15 minutes of fame.

Trying to figure out who the death stare LSU girl is. Just wanna offer to take her to dinner and tell her dad jokes to brighten her day #shootyourshot

If death stare LSU girl isnt in the next SEC Shorts video they should just hang it up for good.

Here’s what was going on in her head when the camera locked in on her.

“I start to realize it’s going to take a miracle for us to win,” Thomas said. “At that moment, I just kind of shut down, like, we’re going to lose. At that moment, a big black camera started coming at me. Earlier in the game, we saw the camera and tried to wave. We didn’t think it was on. One of my friends said, ‘The game is on, they’re not filming you.’

“I kept staring at it because I was like, ‘Why is it in my face? I’m not in the mood for this at all.’ I’m trying to watch this game. The last thing I wanted was a camera in my face.”

let’s just say I wasn’t in the mood for a camera in my face. https://t.co/SRSatr6Bsw

Awesome. And at least she’s being a good sport about it.