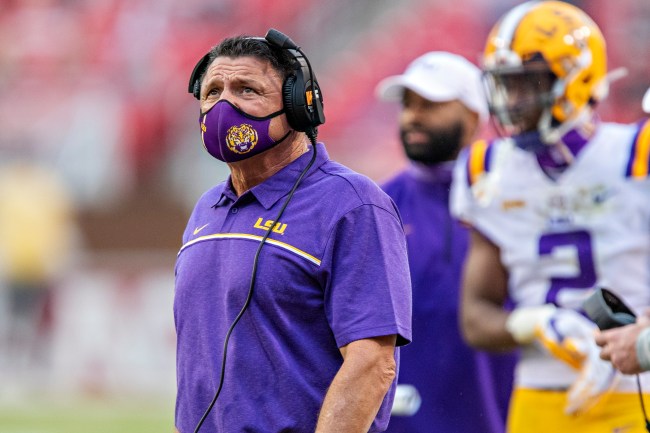 LSU head coach Ed Orgeron was not happy with his team’s defense on Saturday night.

During the first half of the LSU-Alabama game, Alabama wide receiver Devonta Smith torched the LSU defense for three touchdowns including this incredible grab.

Coach O was apparently fed up with his defense getting destroyed by Alabama’s offense and went off on defensive coordinator Bo Pelini on the sideline.

It seems like Coach O wasn’t the only one who was tired of Pelini and his defensive schemes, LSU fans also joined in and crushed LSU’s assistant coach on social media.

Bo Pelini has been rolling out a unique coverage concept all season. The way it works is nobody on LSU goes anywhere near a receiver on the other team, and then that receiver gets the ball and scores a touchdown. This is every other week at least pic.twitter.com/6Q0BPNANJd

Just a reminder, Bo Pelini got paid a salary to prepare a defense for LSU this week.