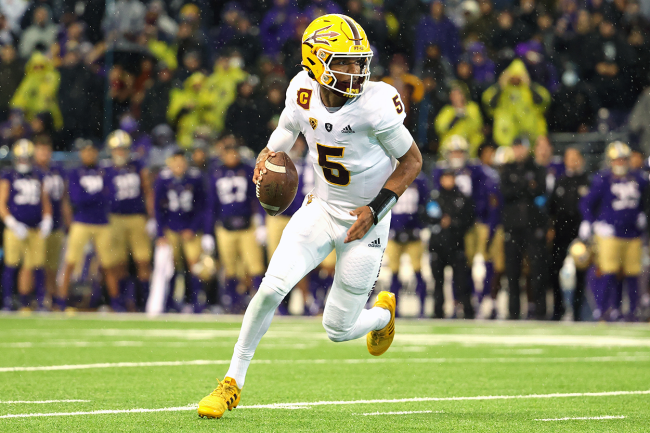 Jayden Daniels’ decision to transfer from Arizona State to LSU was one of the biggest storylines of the 2022 college football offseason. The Tigers have some uncertainty at the position and new head coach Brian Kelly is leaving all of his options open.

In doing so, he recruited Daniels to Death Valley to join a crowded quarterback room. The former three-year Sun Devils starter will compete with redshirt senior Myles Brennan and redshirt freshman Garrett Nussmeier for the starting job in Baton Rouge.

Over the course of his first three seasons on the collegiate level, Daniels was good— not necessarily great. He has only played 28 games because of the COVID-shortened year in 2020, but has completed 62.4% of his passes for more than 6,000 yards and 32 touchdowns to 13 interceptions.

Of the three quarterbacks on the roster at LSU, Daniels may not be the best passer. Whether he is or is not the best arm is up for debate — one that Kelly and his staff will have all summer — but there is no question that Daniels is far and away the fastest.

Jayden Daniels was clocked running at 21 miles per hour during practice this spring.

To put that number in perspective, running back Raheem Mostert was the fastest player of the 2021 NFL season with an 80- and a 76-yard touchdown that clocked in at top speeds of 23.09 and 22.73 mph respectively. Daniels is right in the ballpark.

Daniels will have two years of eligibility remaining with the Tigers. He may not end up starting in 2022 and may be offered the opportunity to transfer as a graduate next season if that is the case. Either way, starter or not, it’s hard to imagine a world where Kelly doesn’t utilize Daniels’ speed in some sort of package this fall. Dude can SCOOT!