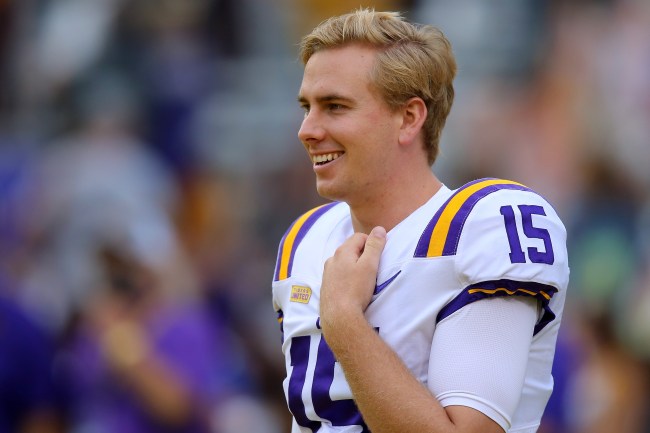 We’ve got the answer to the first question of Brian Kelly’s time as LSU head coach. We know who his quarterback will be.

Myles Brennan had entered his name into the transfer portal back in November, but decided to remove it today. Brian Kelly had reportedly talked to him on Monday about a potential return and after a couple of days to think about it, Brennan decided to stay in Luisiana.

BREAKING: LSU QB Myles Brennan has announced that he will STAY in Baton Rouge and play for Brian Kelly in 2022, via @MylesBrennan. pic.twitter.com/GJeFMMlKmO

This decision from Brennan will give him another shot at a full season as LSU’s starting quarterback. He was expected to serve as their starter each of the last two seasons, but saw both years derailed by injury.

In 2020, Myles Brennan started the first 3 games of the season for the Tigers, but missed the rest of the season after suffering an abdominal tear. Brennan looked to be on pace for an impressive season before the injury.

In his 3 starts, Brennan racked up 1112 passing yards and 11 touchdowns.

He was expected to once again take the reigns this season, but broke his arm in the preseason and never took a snap.

With the Tigers’ current starter, Max Johnson, entering the transfer portal, Brennan will provide next season’s squad with some much needed experience. The other two quarterbacks expected to be on next year’s roster are a current freshman and an incoming freshman.

The Brian Kelly era at Notre Dame came to an ugly conclusion, but things look to be getting off to a pretty nice start at LSU.