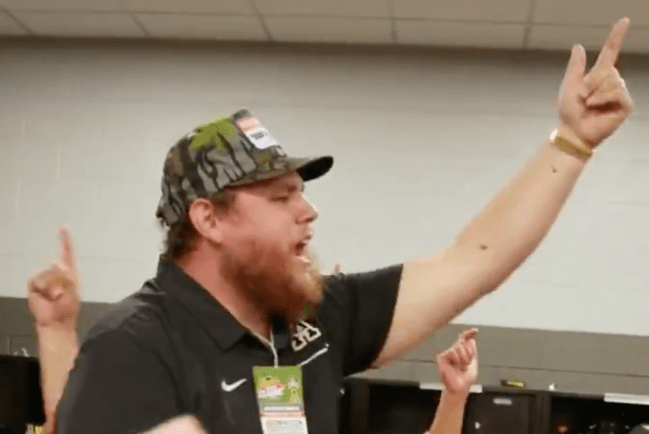 Appalachian State football is 1-0 after putting a beat down on East Carolina last week. And as you can imagine from the Mountaineers, things got a little bit rowdy after the game.

Things really went up a notch when Luke Combs showed up.

Combs, who spent 3.5 years at the school in Boone, N.C., was in the state for two reasons. He not only was headlining his first career stadium show at Kidd Brewer Stadium on campus, but he swung by Charlotte for the season opener.

App State played their neighbors to the East in Bank of America Stadium, about two hours south of campus. After spending the game on the sideline, Combs swung by the locker room to celebrate the victory.

As the team turned up, Combs walked in and had the place jumping. The fellas hoisted him up on their shoulders and he led them in an epic team-wide locker room sing-along of “Beer Never Broke My Heart.”

Despite a dominant victory (the 33-19 score didn’t reflect the game), the Mountaineers didn’t crack the top-25 in Week 2. However, they are a hard-nosed bunch that should make some noise throughout the season with former Clemson quarterback Chase Brice at the helm.

Two days later, Combs returned back to his former school and played in front of 34,114 fans.

It was a full-circle, total goosebumps moment for one of the most humble, kind-hearted people in the industry these days.

He just gets it…. #lukecombs

Eric Church also attended App State at one point — which is another story — and Combs gave him a shoutout with an encore performance of ‘Carolina.’

The whole stadium sang along and it was a pretty magnificent way for Combs to close out an epic weekend in his home state.