Todd McShay Says Mac Jones Is Moving Up His Draft Board: ‘He’s Pulling A Joe Burrow’ 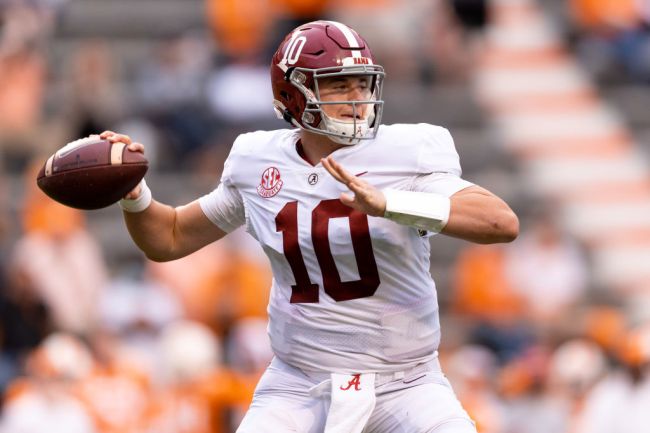 Mac Jones had gigantic shoes to fill at Alabama with Tua Tagovailoa leaving for the NFL and so far, so good for the junior quarterback. Jones has turned some heads this season with 2,196 passing yards, 16 touchdowns and just two interceptions.

While Jones was expected to be a solid starter for the Crimson Tide, nobody fully expected to see what we’ve so far this year. ESPN’s Todd McShay joined ‘Get Up’ on Tuesday morning and talked Jones up quite a bit, saying that he’s one of the top quarterbacks in the 2021 NFL Draft class.

“Mac Jones is coming in and he’s pulling a Joe Burrow,” McShay said. “I’m not saying he’s going to be No. 1 overall, there’s no chance. He’s stepped in and refused to lose that job. He’s gotten better and better every game. He’s been on fire this year.”

Mac Jones is moving up @McShay13's draft board very quickly 👀

"Mac Jones is coming in and he's pulling a Joe Burrow. I'm not saying he's going to be No. 1 overall, there's no chance. … But he's gone from off the radar to … he's been on fire this year!" pic.twitter.com/bClFUa8VJq

While Trevor Lawrence and Justin Fields will be the top quarterbacks taken, maybe even the first two picks overall in the 2021 NFL Draft, McShay giving Jones high-praise is huge for the Tide quarterback. McShay named Lawrence, Fields, Trey Lance, and Zach Wilson as likely first-round picks, but had Jones on that extremely impressive list as well.

While Jones probably wishes he was the top quarterback in his class, it’s clear that he doesn’t mind being a bit of an underdog. He goes about his business and has put up monstrous numbers against SEC defenses, which is something Lawrence and Fields can not say.

Jones seems to just now finding his full-stride, which is scary for the rest of the college football world and maybe NFL defenses in the near future.