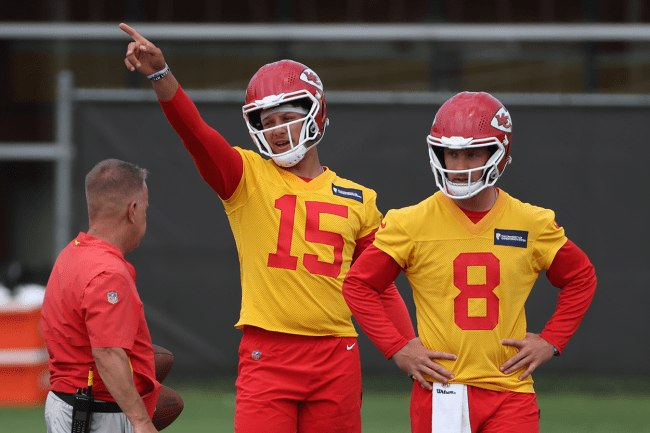 Patrick Mahomes has a lot to prove in 2022. It’s not that he has anyone doubting him and his talent, but there are a lot of question marks surrounding the Chiefs offense without Tyreek Hill this fall.

Mahomes knows what he has to do and is putting in the work to get back to the mountain top and bring home his second Super Bowl ring. And he’s impressing his new pass-catcher in the process.

After trading Hill to Miami during the offseason, Kansas City signed JuJu Smith-Schuster to an expensive one-year deal. The hope is that he can return to form and pick up where Hill left off in terms of some of the week-to-week production.

Smith-Schuster recently wrapped his first offseason program with the Chiefs and said that Mahomes left him in awe on multiple occasions. In particular, the 25-year-old was marveling at one of his new quarterback’s signature no-look throws.

It’s truly ridiculous what Patrick Mahomes can do with his arm.

Video from camp earlier this week shows him sling a no-look pass on a rope and it is truly mind-boggling. Mahomes was so excited about the throw that he walked it off while staring down his coach.

Even Smith-Schuster said that he will have to adjust to Mahomes’ unique ability to make plays and throw his guys open— especially when they might not be expecting the ball to come their way.

“He did the no-look pass today, and I was just like, ‘Wow.’ He even got me, and I was just on the sideline,” said Smith-Schuster. “That’s Patrick for you. That’s what I have to expect.”

There are a few NFL quarterbacks who can do what Mahomes does. However, very few of them can do it like he does and as often. It will be interesting to see how Smith-Schuster can fit into the offense.