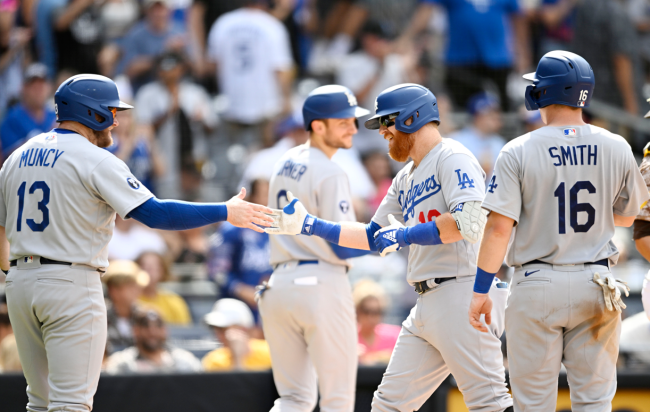 On Sunday, everyone, including Major League Baseball, was under the impression that the Los Angeles Dodgers had clinched a playoff spot after an 11-2 victory over the San Diego Padres.

Stories were written and published that stated this as fact.

“Dodgers are back in the postseason, for the 10th straight year,” wrote Dodgers blog True Blue LA.

After Sunday’s win, in the clubhouse, manager Dave Roberts and the Dodgers’ players and staff toasted their playoff-clinching victory. They were even given caps with the postseason logo on them.

The @Dodgers are the first to clinch a playoff spot this season! 🙌 pic.twitter.com/xOBHjICCfr

“This is the first time I’ve ever been on a playoff team, and all the other guys are ho-hum, but this is a big deal for me,” said Dodgers pitcher Andrew Heaney.

“The goal is still not over. We still have a lot of work to do,” said Dodgers infielder Max Muncy.

“It’s a big accomplishment,” Roberts said. “For me it’s just making sure guys appreciate that it’s not a rite of passage to get into the postseason every year and there’s still a lot of work to be done. I feel our best baseball is yet to be played and just continue to stay focused.”

Turns out Roberts and Muncy hit the nail on the head. They are going to need to stay focused and the job is not done because they didn’t actually clinch a playoff spot on Sunday, regardless of what those caps they were given said.

After saying the Dodgers had clinched a playoff spot on Sunday, MLB took it back

On Monday, Major League Baseball announced an “internal error” was made due to a series of tiebreakers that hadn’t been considered.

MLB said Monday, however, that it failed to account for a potential scenario in which the Padres (77-64) overtake the Dodgers for the NL West title and Los Angeles finishes in a three-way tie at 96-66 with the Milwaukee Brewers and St. Louis Cardinals. Milwaukee would win the NL Central in that scenario while St. Louis would win the wild-card tiebreaker with Los Angeles based on head-to-head results this season.

Barring a collapse the like that sports has never seen, the Dodgers will, of course, make the playoffs. All they need is for the Milwaukee Brewers to lose another game and they’re in (they can also clinch with a win over Arizona on Monday… we think).

Fans, once again, were amazed that Major League Baseball could screw up something so simple, yet so important.

So the Dodgers have to win ONE more game to clinch after YOU messed up?

So #Dodgers didn’t clinch a postseason spot yesterday after all. MLB failed to account for possibility of SD catching them in NL West and LA falling into 3 or 4 way tie for wild card. So … give back the hats?

Only if the Dodgers manage to lose all of their next 23 games.

How does this happen? Dodger front office doesn’t know when/ if they clinch?

Now the question becomes, will the Dodgers be cursed for celebrating their playoff spot before it was actually official?

@BenAndWoods I think the karma on the playoff clinch falls on MLB not the Dodgers. It was their error, not Dave’s. And it was a champagne toast. They’re ready to spray it all over the clubhouse when they clinch the division Tues or Wed.