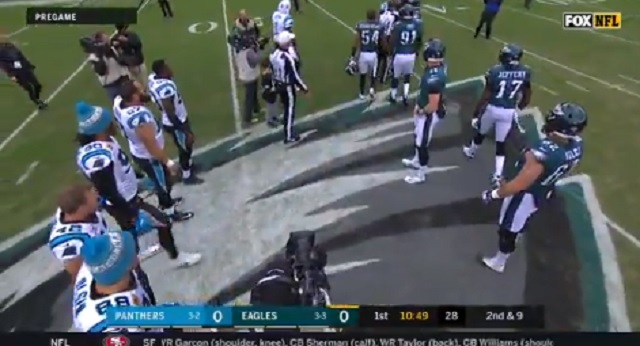 Last year, Eric Reid got into a public spat with Malcolm Jenkins for excluding Colin Kaepernick in a meeting between The Players Coalition and the NFL where Jenkins asked players if they would stop protesting the anthem if the NFL made a charitable donation to causes they support.

“Malcolm did text me this morning asking if we would be comfortable ending our demonstrations if the NFL made a donation,” “At that point, that was the last straw for me. He had a conversation with the NFL. We agreed that multiple people would be part of the conversations with the league so it just wouldn’t be him. He didn’t stand by his word on that. At no point did we ever communicate an agreement with the NFL to end the protest.”

[NFL Commissioner] Roger Goodell is trying to make this as easy for the owners to agree to as possible so that—again, their goal is to end the protests,” R. “He’s trying to make it as easy possible to do that for the owners. He’s going to present them with a proposal saying, Look you really don’t have to do anything. We’re just going to shift this money from this area and just move it here.”

Jenkins defended his actions at the time.

‘m not sure about whether Kaepernick wants to be involved,” “I saw this as an opportunity to create a group of players that could use their voice together to really make some change, and we still have that opportunity. We’ve been able to go from protests to now speaking with ownership about something that’s never been in place before. We’re proud of that. And we’ll continue to work with whoever wants to be in that conversation.

It seems like there’s still bad blood between the two players because they got into it before today’s Panthers-Eagles game.

#Eagles Malcolm Jenkins and #Panthers Eric Reid had confrontation after the coin toss before the game started.

Video with sound of the Eric Reid-Malcolm Jenkins confrontation. pic.twitter.com/Q6p5pAdDDo

Update: Reid and the Eagles have been getting chippy throughout the game.