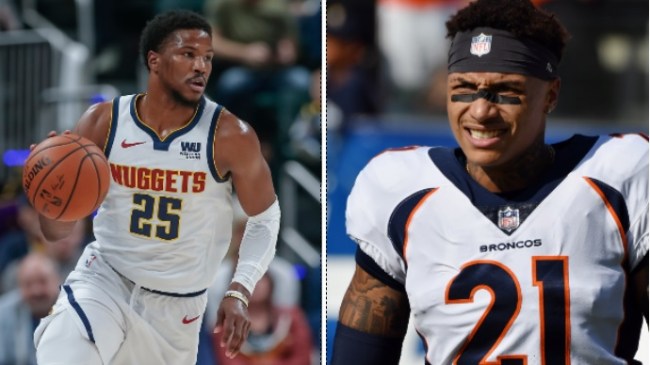 Denver Nuggets guard Malik Beasley got into a heated altercation with former Denver Broncos safety Su’a Cravens all over an Instagram model.

According to TMZ, Beasley fot into a fistfight with Cravens in an apartment lobby over a situation with his baby mama/ IG model Montana Yao.

NFL safety Su’a Cravens got into a crazy fight with Denver Nuggets guard Malik Beasley in an apartment lobby … and TMZ Sports has the insane video.

We’re told Beasley was heated over a situation involving Instagram model Montana Yao — and had called out Cravens to settle things once and for all.

You can see in the video, Cravens — who was a member of the Broncos at the time — enters the lobby and is immediately confronted by Beasley.

One thing quickly leads to another and the fists begin to fly.

The 2 pros trade blows for a minute before Su’a takes Beasley to the ground and appears to be winning the fight from the top position.

You can see Yao and a male friend of Beasley’s jump in and removed Cravens. The NFL player eventually backs away from the scrum.

Meantime, we’re told Cravens continued to taunt Beasley — and invited him to “step outside” to continue the fight. Beasley DID go outside, but we’re not sure what happened next.

TMZ has obtained video of the brawl between the two athletes.

After the fight, Cravens hopped on Snapchat to brag about beating Beasley up.

“I just had to beat a n***a ass that just tried me,” Cravens said while wearing the same cloths from the brawl … “Scratched my face, but I f*cked that n***a up, ol bitch ass n***a.”