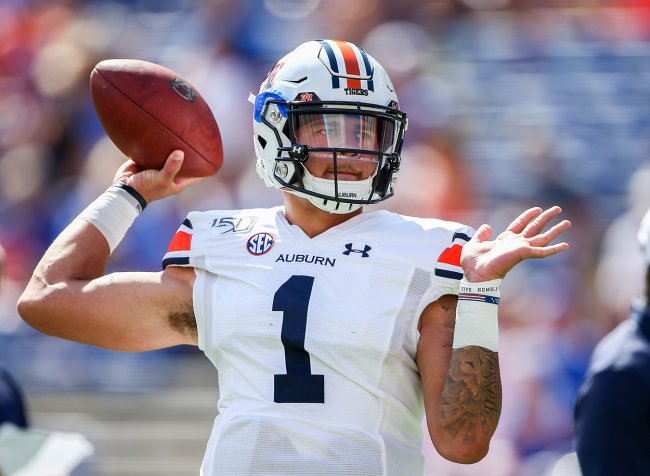 Joey Gatewood’s college football career has not quite worked out the way that he thought it would. After playing for three schools in four years, the redshirt senior is changing positions.

Gatewood, a former four-star quarterback recruit, committed to play for Gus Malzahn at Auburn as part of the Class of 2018. He stands 6-foot-5, 230 pounds and is a dual-threat signal-caller.

At least, he was.

Gatewood redshirted as a freshman in 2018 and saw limited action with the Tigers in 2019. After two years at Auburn, the Florida-native transferred to Kentucky and played in six games as a redshirt sophomore.

After his first four years on the collegiate level, Gatewood then transferred to his third program and landed at UCF under Malzahn in 2021. Despite the familiarity with his head coach, who recruited him to Auburn, Gatewood attempted only eight passes on the year.

Now, in his fifth and final year of eligibility, he is making a switch. Gatewood, who would be competing with Mikey Keene and John Rhys Plumlee for the starting quarterback job, will be on the receiving end of their passes this fall.

Joey Gatewood is going to play wide receiver at UCF in 2022.

“Gatewood — Joey’s a guy that moved to receiver last week,” revealed Malzahn after spring practice earlier this week. “He’s got a real chance. So, I’m excited to see his development with that. The good thing is, we got a lot of different guys to give us some depth.”

Having a player who is 6-foot-5 and has natural downfield speed and strength play wide receiver could be extremely valuable as the Knights try to define their offense for this fall. However, the fact that Gatewood — an extremely highly-touted quarterback recruit who was supposed to blossom into a star — is having to change positions speaks loudly about Malzahn’s ability to develop a quarterback.

Naturally, Auburn fans had a lot to say about the move. In particular, they think it is hilarious that some of the Tigers faithful believed that a player who is now a wide receiver should have started over Bo Nix at quarterback.

This goes to show how bad malzahn is at developing qbs. https://t.co/9liIztjHHY

Oh my god Gus Malzahn is a JOKE https://t.co/yU4JWNpLuW

I remember when “Auburn fans” were calling for him to start over Bo 😒 https://t.co/AGKFxPu52L

It will be interesting to see if Gatewood is able to make the transition and what kind of role he will play as a receiver.