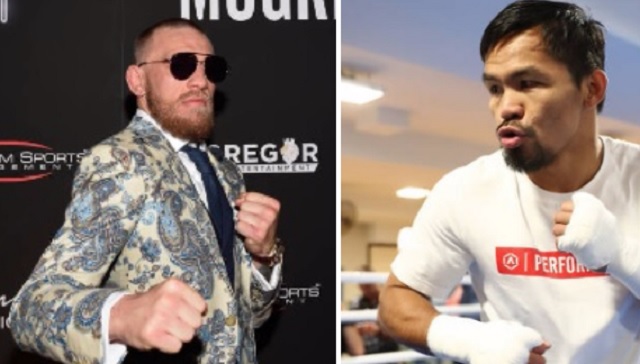 Everybody wants to fight Conor McGregor these days. After being called out by Oscar De La Hoya just a few weeks ago it appears that McGregor may be opting to return to boxing ring to fight another boxing legend, Manny Pacquiao.

Today, Sky Sports reporter Jim White claims that Manny Pacquiao had confirmed that he is currently in talks to fight McGregor in the spring of 2018.

Just last week Pacquiao posted this picture on Thanksgiving in which he teased a “real boxing match” with McGregor on Twitter.

The 39-year-old Pacquaio also floated his name as a possible suitor to fight McGregor in boxing before the Mayweather-McGregor fight was finalized.

Manny Pacquiao, however, is open to the possibility of fighting McGregor himself if the Mayweather bout falls through, saying he’d have no problem stepping in the ring with him — on one condition.

Asked whether he thought McGregor could last 12 rounds with him, Pacquiao said: “I’m sure he will be moving around.

“I didn’t see it [footage of Conor sparring]. But if we are talking about Conor McGregor and boxing, it’s different. Boxing is different than MMA.”

It seems like Pacquaio is just putting himself out there to gauge interest in a fight with McGregor. In the end, I see Conor taking a fight against De La Hoya or Mayweather but who knows maybe he does chose Pacquaio instead.