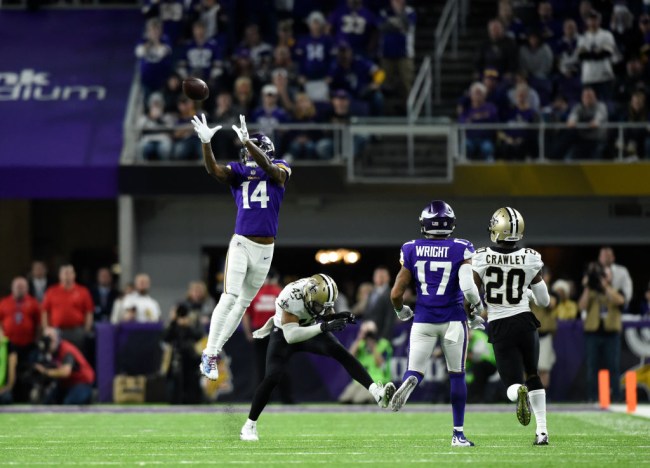 The Minnesota Vikings are on their way to the NFC championship game much to the chagrin of Saints rookie safety Marcus Williams, whose missed tackle on Stefon Diggs in the final play of the game cost the Saints a chance to advance in the playoffs.

Rookie safety Marcus Williams feel to his knees on his way to locker room after his missed tackle cost saints the game and then inside the locker cried with his head in his hands.

After the play went down the Internet lost its mind and mocked Williams over his missed tackle.

This mistake by Marcus WILLIAMS — missing that play on Stefon Diggs — May be the absolute WORST MISTAKE I’ve ever seen in NFL Post-Season History. If it’s not THE worst it’s certainly up there. All the man had to do is make a tackle and the game is over. Horrible, Horrible Error.

Marcus Williams' Saints teammates waiting for him at the lockers right now like… pic.twitter.com/czsNVjyXAV

Marcus Williams getting this look in the locker room. #vikings pic.twitter.com/W4OZUDwTOs

Marcus Williams, Coach wants to see you. Bring your playbook.

Marcus Williams attempting to board the flight back to New Orleans. pic.twitter.com/hO0bqoJG47

Feel terrible for Marcus Williams of the Saints. Kid had a great rookie season and hate to see it end like this. But this is what happens when the rules have made it so defensive players are afraid to hit guys in fear of penalties and fines.

Poor Marcus Williams will have his career defined by the this play and will never be able to live it down. Williams has had a spectacular rookie season, and will probably have a pretty solid career but this is the play that will be replayed over and over again for years to come. Hopefully he gets a chance at redemption and will be able overcome getting embarrassed on a national stage.