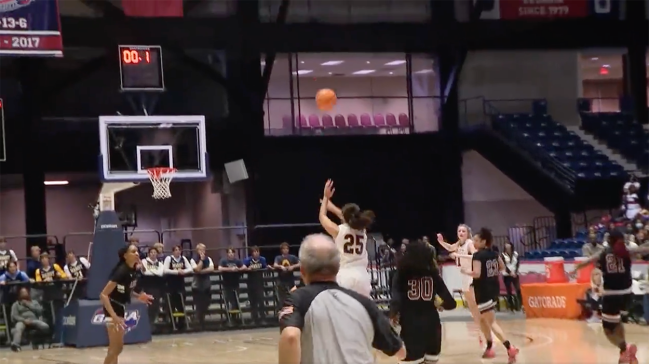 Avery Fantucci m̶i̶g̶h̶t̶ ̶b̶e̶ is the most clutch basketball player in the country right now. The senior guard at Marist High School in Georgia gave her school its first state title in girls basketball on Wednesday night.

The fifth-ranked War Eagles took down top-ranked Luella in the Class 4A girls basketball championship game in Macon, but it didn’t always look like that was how it would play out.

With seven seconds left in the fourth quarter, Luella broke free on an in-bound play to take a 46-43 lead with four seconds remaining in the game. It looked like it was over.

Well, Fantucci was not going to let her career end on a loss. She took the ball up the hardwood and chucked up a desperation, Hail Mary three-pointer from just beyond half court.

Sure enough, she was right on the money and sunk it. It was unbelievable and Chris Mooneyham rightfully lost his mind on the call.

Tonight, no doubt, one of the wildest finishes in Georgia High School basketball history. And I was blessed enough to call it…1/2… pic.twitter.com/FtchqpaQeK

The team went wild, but remember, it was not to win the game, it was to send the game to overtime. Marist still had a chance.

The game was tied at the end of the first extra period and went to double OT. And then things got crazy again.

Luella had the ball with a chance to score and win the state championships with less than 10 seconds left on the clock, but Marist forced the steal. In turn, they threw the ball up the court to Fantucci who was streaking toward the basket with no one in front of her.

As the clock counted down 4… 3… 2… 1… Fantucci narrowly got to the hoop and put up a layup. It bounced once off of the backboard, the clock hit zero, and the ball went in.

Marist one the state championship in double overtime on Fantucci’s second buzzer-beater of the night. Unreal.

Many people noticed that the gameclock appeared to run out on the broadcast, however, a baseline angle shows that the in-arena clock and broadcast clock were off. Fantucci got both shots off in time and played the hero not just once, but twice.

She was full of emotion after the win.

ICYMI: @MaristSchool's @AveryFantucci is now legendary. Her 2 Buzzer-beaters helped the War Eagles beat top-seed Luella 56-54 in double-OT for the @OfficialGHSA Girls 4A State Championship. @thekellyprice caught up with her after the game. pic.twitter.com/us1tdwAWIq

Fantucci, who is committed to play softball at Michigan, is forever a legend. She will never forget March 9, 2022.