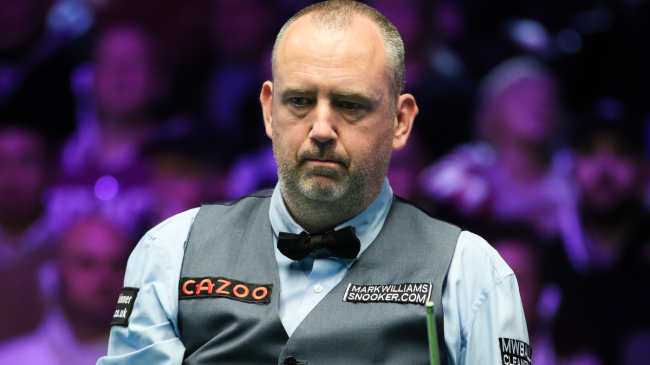 Snooker player Mark Williams battled a pair of opponents in the recent UK Championship event over the weekend, which led to an upset loss and an early exit.

Williams, a three-time World Champion at the sport, suffered a shocking defeat to Jamie Clarke on Monday, falling by a score of 6-3. During that loss, the pro was forced to take multiple bathroom breaks mid match while dealing with a bout of food poisoning. His details on the bizarre incident are quite graphic.

“That was probably the worst I’ve ever felt playing a snooker match. If it wasn’t such a big tournament, I dont think I would have come back out after the interval. I started the match with a pair of boxer shorts and by frame three I didn’t have them anymore. If you see a pair in the bin, they’re mine… I can’t even go home tonight because I’d need about 20 stops on the motorway.” -Mark Williams

The loss was obviously disappointing for Williams, who said he’d prepared well for the UK Championship. Opponent Jamie Clarke sympathized with his foe’s discomfort, but it didn’t stop him from winning and advancing to the next round of the tournament.

“I could see Mark [Williams] wasn’t well, and I sympathized with him, but it didn’t put me off. In a strange way, it helped me because it took the attention away from me.” -Jamie Clarke

The win will give Clarke, who entered as the No. 49 ranked player in the world, an opportunity to move up the leaderboard.

Who is Mark Williams and what is snooker?

Snooker is a sport similar to pool or billiards. Here’s a more descriptive assessment of the game from Wikipedia.

Snooker is a cue sport played on a rectangular table covered with a green cloth called baize, with six pockets, one at each corner and one in the middle of each long side. The game is played with twenty-two balls, comprising a cue ball, fifteen red balls, and six other balls—a yellow, green, brown, blue, pink, and black—collectively called the colours. Using a cue stick, the individual players or teams take turns to strike the white cue ball to pot other balls in a predefined sequence, accumulating points for each successful pot and for each time the opposing player or team commits a foul. An individual frame of snooker is won by the player who has scored the most points. A snooker match ends when a player reaches a predetermined number of frames.

The UK Championship is one of the sport’s largest tournaments, being played annually since 1977. It’s considered to be one of snooker’s “Triple Crown” events and his held in York, England.

Mark Williams had previously taken home a pair of UK Championship titles. His upset stomach this weekend hindered him from landing a third.

Related: Player pulls off the most insane run of pool shots to cap incredible win