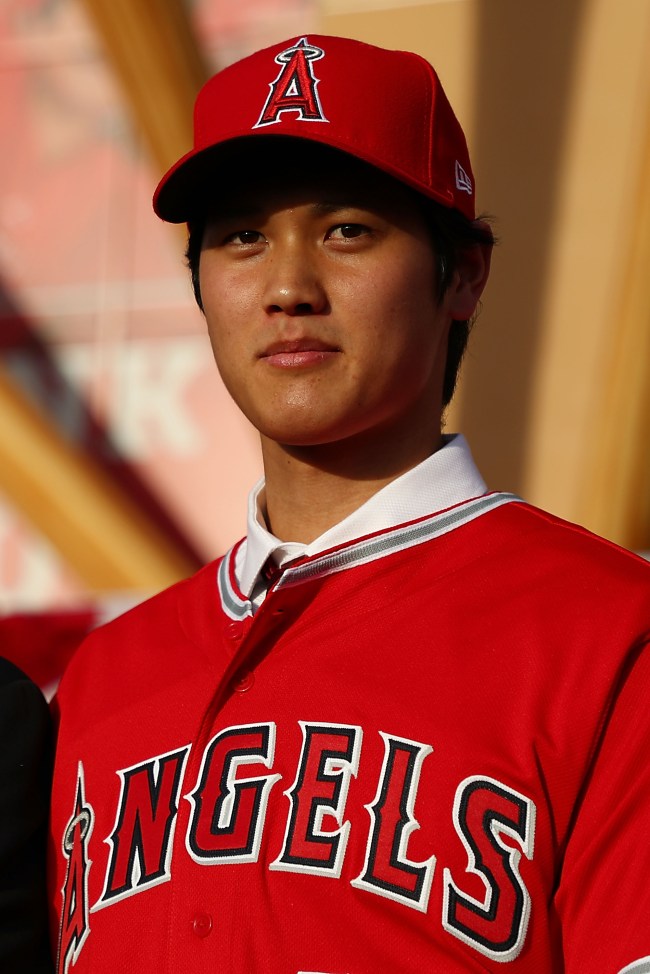 ANAHEIM, CA - DECEMBER 09: Shohei Ohtani speaks onstage during his introduceion to the Los Angeles Angels of Anaheim at Angel Stadium of Anaheim on December 9, 2017 in Anaheim, California. (Photo by Joe Scarnici/Getty Images)

Pitchers and catchers report in less than a month, but marquee free agents remain unsigned (see: Arrieta, Moustakas and Hosmer); and with just 51 players (includes just 13 position players) signed thus far this offseason, for a total of $655 million, whispers of collusion exist. Last week, executives from MLB and the MLBPA met to discuss the concerns; with MLB issuing the statement “there are a variety of factors that could explain the operation of the market. We can say that without a doubt collusion is not one of them.” That’s unlikely to sway the opinion of the MLBPA, which believes there is a template (which goes against the concept of free agency) for superstar player contracts; 3 years or $20 million plus annually, but not both.

Howie Long-Short: Franchise values have increased from $18.1 billion to $46.1 billion over the last 5 years and MLB will generate $10 billion in revenue this year, so it’s not like there isn’t money to pay the players; teams have just come to the realization that the money is better spent on younger, cheaper ones. As one league executive put it, “we pay players the minimum for three years and arbitration for three or four years, and then they get paid more in free agency for their decline?” Team’s wisely aren’t looking to reward past performance, they’re paying for future production. Is it collusion if everyone comes to the same intelligent decision?

Fan Marino: Sure, it’s likely that a handful of teams are saving for next off-season when Harper/Kershaw hit the market, and it’s true that star young players are signing under-market long-term deals (to guarantee their big payday); but, the rest of the proposed excuses for the cold-stove are nonsense. Teams aren’t waiting on Boras’ guys to sign, Ohtani and Stanton weren’t stalling the market, teams like the Yankees and Dodgers aren’t concerned about the luxury tax threshold and there isn’t a team owner in the league that doesn’t want to win (in the name of profits). The cold stove is a product of baseballs fundamentally flawed economic system (i.e. no floor on team spending). I suspect a strike is on the horizon; the current CBA expires following the 2021 season.

The new F1 (FWONK) logo, created by Wieden & Kennedy (created Just Do It for NKE), may be infringing on a pan-European trademark (and potentially trademarks in 10 other countries) registered to 3M (MMM). The new logo representing a “race track”, looks eerily like the logo used by Futuro (compression tights) to represent a “stylized knee joint”. The purpose of the FWONK rebrand, which cost an estimated $1 million, was to create a logo that would be optimized for digital platforms and merchandising; with the intention of launching the new clothing line at the season opener in March, a plan that may now need to be altered. 3M has not yet opposed FWONK’s trademark registration, but is “looking in to this matter further.”

Howie Long-Short: 3M (formerly Minnesota Mining & Manufacturing Company) owns Scotch tape, Scotch-Brite and Post-It Notes (among others); and sells more than 55,000 products. In 2016, the company generated $30.1 billion in revenue; 17x what FWONK brought in. FWONK could pay MMM for the rights to continue using the logo, but that decision would likely draw pushback from the teams; as the expense would reduce their prize pool. Alternatively, FWONK could choose to use one of the other 2 logos it applied for trademarks on; or simply revert to the old logo (the fan choice).

Fan Marino: F1 fans may not love the new logo, but they should be excited about David Hill participating in the production of F1 race broadcasts. Hill “will oversee the graphics package and the way the race is televised”. Fans may not recognize Hill’s name, but if they watch the NFL on Fox they’ll recognize some of his work; including the score bug and first-down graphics. He’s also credited with launching Fox Sports, building the Fox Sports network of RSNs (recently sold to DIS) and won an Emmy for producing the 2011 World Series. Great hire!

Verizon (VZ) and the NBA have announced a 2-year extension that will enable NBA “League Pass” subscribers to live-stream games on Yahoo (AABA) platforms and mobile devices. The new deal enables VZ to produce original NBA content (and distribute across Oath properties), gives VZ users (around the world) access to Yahoo’s NBA fantasy sports game and requires VZ to establish a technology fund that will experiment with new formats (i.e. augmented reality, virtual reality). The move comes just a month after VZ agreed to pay $2.25 billion (for 5 years) for non-exclusive rights to stream NFL games on Yahoo Sports, AOL and go90 (among Oath assets); following prior deals that give them rights to broadcast Liga MX and National Women’s Soccer League games across Yahoo platforms. VZ Chief Content Officer Brian Angiolet has said the company intends on being “the first screen consumers go to find live sports”.

Howie Long-Short: VZ acquired Yahoo last year with the intention of building its programming around sports. Why? “Sports is the best aggregator of an audience”; among the last television programs that viewers watch live. On the NBA side, this deal gives them access to a younger demographic (the mobile audience) and should help to drive engagement (if not viewership); VZ users spend 30 billion minutes on fantasy games/annually and theoretically would want to see how their roster performs. If DraftKings is making the pivot from DFS to sports betting, could other outlets with large fantasy player databases (see: Yahoo, ESPN) be far behind?

Fan Marino: “League Pass” offers NBA fans the ability to watch 1,100+ live out-of-market games for $99/season. You can try it out for free, as VZ is giving registered users 8 complimentary “League Pass” games; tremendous news for those of us outside of Houston and L.A. that don’t want to miss the next Clippers/Rockets game (Feb. 28). The one Monday night ended with several Rockets players (Paul, Ariza, Harden) storming the Clippers locker room in search of a fight with Blake Griffin and Austin Rivers; a welcomed change from the superstar kumbaya (or banana boat rides) that we’ve grown accustomed to in the age of super-teams.