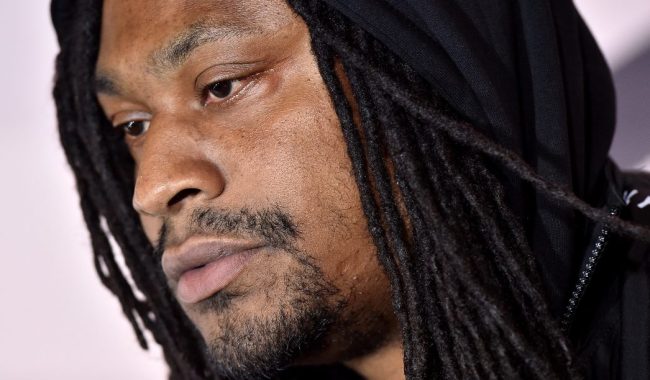 It’s been a solid retirement so far for Marshawn Lynch as he has made some serious career choices so far. After becoming a part owner of the Seattle Kraken, Lynch is rumored to be working for Amazon as part of the Thursday Night Football crew along with a unique return to the Seattle Seahawks. However, Marshawn Lynch received a DUI that could hinder those career opportunities.

Marshawn Lynch Pulled Over For DUI In Las Vegas

According to the Las Vegas Police Department, officers on the scene pulled over a vehicle as they suspected the driver may have been intoxicated. Once they pulled over the car, the driver turned out to be Marshawn Lynch. From there, the LVPD booked Lynch for driving under the influence.

Through the course of the investigation, officers determined that Lynch was impaired and conducted an arrest. Lynch was transported to the Las Vegas City Jail and booked for driving under the influence. (2/2)
Event: LLV220800034519

His mugshot was later released by the City of Las Vegas Twitter account. Just based on the photo, it appears Marshawn Lynch was very much intoxicated while behind the wheel. Luckily, there are no reports of any accidents or anyone getting hurt. Even so, this is reckless behavior from the former star running back. Especially considering he has some sweet gigs lined up with Amazon and the Seahawks.

As of now, rumors are that Marshawn Lynch is going to join Amazon to work with the Thursday Night Football crew, per Sporting News. “Charissa Thompson was reported to be the studio host for the pre- and post-game coverage for the streaming service, while others, including former running back Marshawn Lynch, are expected to play a role on the network, as well.”

Additionally, Mike Dugar claims the Seattle Seahawks will have Lynch serve as a special correspondent and help produce creative content for projects regarding the team.

Later in the season, the Seahawks say, “Marshawn Lynch will also act as a special correspondent for the team, where he will produce creative content for a variety of projects.”

With everything going right in Lynch’s life, it’s hard to see him slapped with a violation like this. Hopefully, this was just a one-time mistake and he can get back to work with no more hiccups. Look for Marshawn Lynch to bounce back from this as he aims to work alongside Amazon and the Seahawks for years to come.