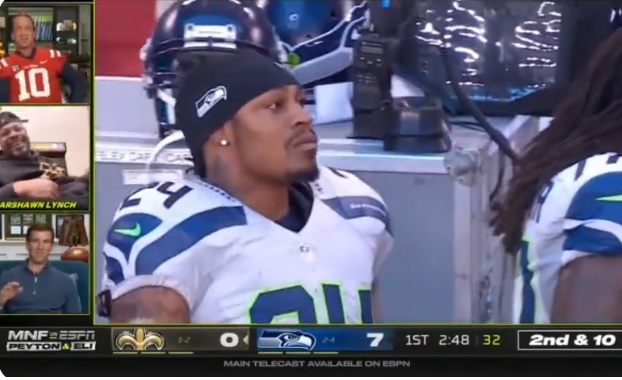 It was only a matter of time until we received the FCC complaints about Marshawn Lynch’s appearance on Monday Night Football.

Back in October, Lynch joined the Peyton and Eli Manning for their Manningcast of the Saints- Seahawks game. During his appearance, Lynch talked about drinking Henny before jumping on-air and cursed several times, which led to an apology from ESPN.

Before Marshawn Lynch hopped on the ManningCast, he took a Henny shot for Peyton and Eli.

TMZ is now reporting that the Manningcast episode featuring Lynch received two FCC complaints, one of which is a doozy. Here’s the letter from one angry parent calling for the FCC to punish ESPN over Lynch’s cursing.

“I had children in the room at the time, and I am very upset that ESPN allowed Marshawn Lynch to repeatedly curse on live TV,” “I have an expectation when I turn on ESPN that I will not have to remove children from the room.”

“The ESPN2 broadcast on Monday night was laced with vulgar words from Marshawn Lynch,” the second complaint added. “Peyton Manning apologized for it, but there is no place on this type of show at this hour for this language.”

“ESPN could have warned him of the rules for live television in advance, monitored his speech and conduct when he was on the air, and removed him immediately after the first curse word was uttered. This is totally unacceptable!”

The pissed viewer said the network needs to be “sternly punished for violating FCC regulations” … although the FCC actually has no jurisdiction over ESPN or ESPN2.