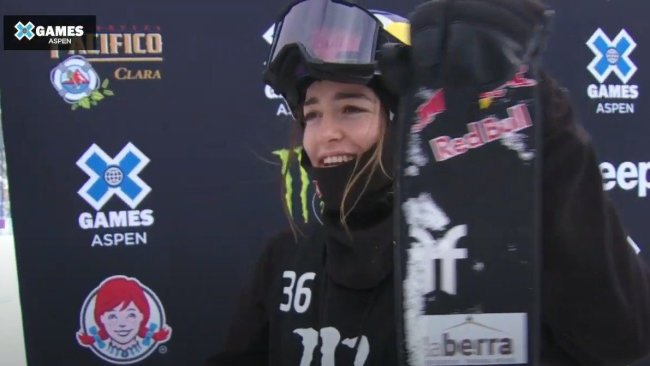 Mathilde Gremaud went full-send with a Switch Double Cork 1440 to win gold in the final round of the X-Games Skiing Big Air competition and made history in the process.

To win the event, the judges take a combined score of the top two of four runs for each skiier. The 20-year-old from Switzerland went out and missed a switch double cork 1080 tail grab on her first run of the day. She recovered and landed the twice-inverted flip with three full rotations on her second effort. It might have been the trick of the event.

It was a similar scenario as she set up to attempt something that had never been done before. Gremaud dropped in switch (backwards) and came in too hot, went too big and continued to rotate as she landed. The over-rotation resulted in a nasty spill and she stayed down for awhile before eventually getting back on her feet and heading to the top of the jump for her fourth run. Instead of playing it safe and putting a completed score on the board, she went after history again and nailed it.

“I felt bad after I fell but I was so close to getting there that I told myself I had to go again,” she said. “And it worked!

Gremaud stomped the first-ever 1440 in women’s competition history, adding a double cork to the mix and dropping in switch. The Switch Double Cork 14, as it is better known, is two full-vertical flips and four horizontal 360-degree rotations, while taking off and landing backwards.

The 2018 Pyeongchang Olympics silver medalist won the Big Air event at the X-Games in 2019 and has been working to perfect the trick over the last year. She landed it on the slopes of the Allalian Glacier for the first time in September, becoming the first female freeskier to do so.

Her preparation for the massive send included attempting the feat into airbags on landing, focusing on getting the in-air element down before trying to stick it.

The Swiss superstar’s hard work paid off and she took home the historic clinkage as a result.